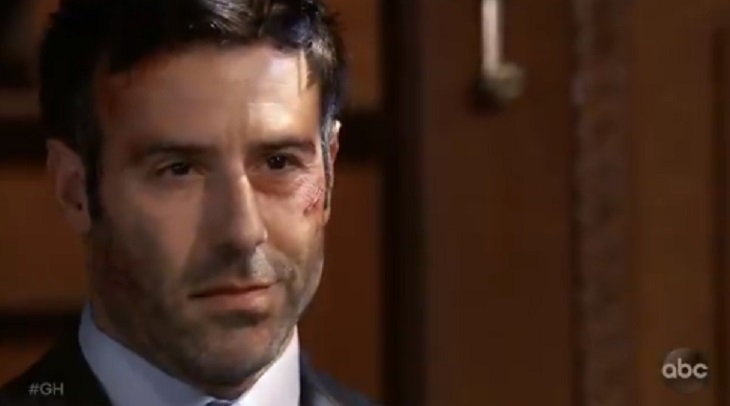 “General Hospital” spoilers for Monday, July 1, tease that Robert Scorpio (Tristan Rogers) will meet up with Laura Webber (Genie Francis). During their conversation, the topic of Dante Falconeri (Dominic Zamprogna) will come up. Laura will push Robert to bring her daughter’s husband home. She’ll hope Robert can pitch in on Dante’s return to Port Charles for Lulu Falconeri’s (Emme Rylan) sake.

Meanwhile, it appears Maxie Jones (Kirsten Storms) will get a Dante distraction. She’ll tell Lulu about something terrible, but she’ll seem more annoyed than concerned. Maxie and Lulu may work together to tackle some problem – if it’s something they can fix. Regardless, Lulu and Maxie always make a great team.

Over with Drew Cain (Billy Miller), he’ll get a chance to share his true feelings. Drew’s had to bottle things up a bit lately thanks to Kim Nero (Tamara Braun). He couldn’t fall apart when she was already in such a fragile place. Kim needed Drew to be her rock, so he did his best to stay strong for her.

Fortunately, Drew won’t have to do that in Monday’s episode. He’ll come clean about his broken heart, so maybe Curtis Ashford (Donnell Turner) will let Drew unload his Oscar Nero Quartermaine (Garren Stitt) grief. Next, Harrison Chase (Josh Swickard) will fight for what’s right. He’ll speak with Mac Scorpio (John J. York) about Willow Tait (Katelyn MacMullen) and what she’s up against.

Chase will insist that Willow’s desperate to keep her child away from Shiloh Archer (Coby Ryan McLaughlin). It looks like he’ll convince the interim police commissioner to help, so that’s good news for Willow. However, the situation with “Wiley Cooper-Jones” is growing increasingly dire. That’s because Shiloh just put the puzzle pieces together and now knows too much.

“General Hospital” spoilers say Shiloh will get on the phone with someone and announce that he knows where his son is. GH fans realize “Wiley” is actually Jonah Corinthos, but Shiloh’s in the dark on that. He’ll be convinced that “Wiley” is his baby, so he’ll take steps to get custody ASAP.

Across town, Brad will hold “Wiley” in his arms as he chats with Michael Corinthos (Chad Duell). He’ll confess that keeping “Wiley” may be easier said than done. Brad will be worried on several levels since he knows this is Michael’s kid and doesn’t want the truth to blow up.

Finally, Sam McCall (Kelly Monaco) will give Jason Morgan (Steve Burton) reassurance. She’ll think Jason should let her handle something, so Jason may relent once things turn romantic. “General Hospital” spoilers say Jason and Sam will take the time to reconnect, so “JaSam” fans won’t want to miss it.

Another exciting episode’s on the way! We’ll give you updates as other details and rumors emerge.