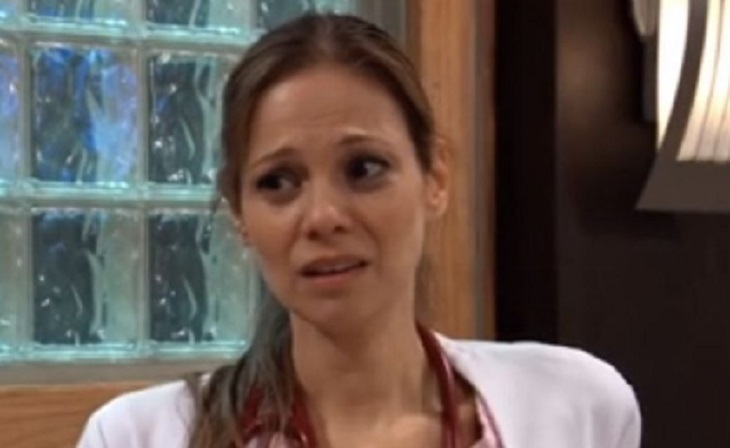 General Hospital spoilers tease that Shiloh Archer (Coby Ryan McLaughlin) will unexpectedly be summoned to Dr. Kim Nero’s (Tamara Braun) apartment in Friday, June 28th’s episode of General Hospital! But will Kim reach out to Shiloh for spiritual help of the Dawn of Day variety, possibly having found one of his books in her late son Oscar Nero Quartermaine’s (Garren Lake Stitt) things and have read it, or is she looking for Shiloh to be a sperm donor so she can have another baby?

Even Shiloh might be taken aback by that kind of a request, since the two barely know each other! Besides, Kim raised Oscar all by herself and is not likely to want to raise a new baby all by herself – and in order to have a baby with Shiloh, both she and the baby will need to be deeply entrenched in Dawn of Day and in “the Trust”, which usually takes a lot of DOD seminars and a lot of money!

Shiloh needs all his money to pay his lawyer and to get a son back that he already thinks he has, so if he can con Kim into paying a lot of money to rise to the level of “The Trust” quickly, he just might give her the promise of a new baby, although he probably won’t make it with her there in her apartment!

Besides, Michael Corinthos (Chad Duell) just bought the house Shiloh had been leasing for the Dawn of Day out from under him and he may no longer have a building; if Kim wants to join, she might have to go to Beecher’s Corners!

General Hospital spoilers say that Kim will make a fateful decision that will impact the lives of both Drew Cain (Billy Miller) and Julian Jerome (William DeVry), and having Shiloh’s baby certainly would do that, as well as impact her own life and that of her child, if she does become pregnant by Shiloh, in ways she can never be able to imagine! This would be an excellent time for Ghost Oscar to appear and tell her “NO, MOM!!! DON’T DO IT!”