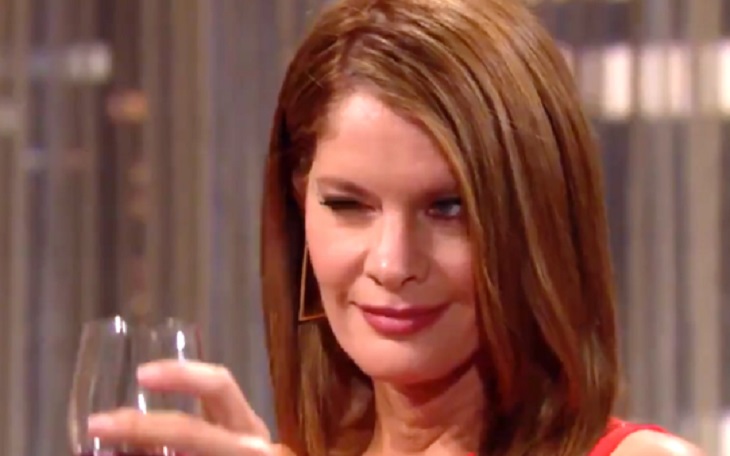 Young and the Restless spoilers tease that this week will be one for the records on the CBS soap opera. With multiple fan favorites popping up in Genoa City this month on Y&R, it’s hard to wrap our heads around all of the comings and goings. But, one huge return stands out, Michelle Stafford taking back over the iconic role of Phyllis Summers.

Although we were sad to see Gina Tognoni go, you can’t deny the sparks that Michelle Stafford brings every time she takes the stage on The Young and the Restless.

Michelle Stafford took the stage at CBS’ “The Talk,” along with her co-stars Melissa Claire Egan and Mark Grossman to discuss her big return, and Melissa’s big return as Chelsea Newman too.

Young And The Restless Spoilers – Phyllis, Adam, and Chelsea Heat GC Up

Young and the Restless spoilers tease that Phyllis Summers, Adam Newman, and Chelsea Newman have some hot scenes coming up and fresh, must-see storylines. This is the three actors first time working together, and the sizzling chemistry is undeniable. In fact, Stafford says that they are “Bringing Bad” to Y&R.

Michelle took to Instagram and shared a photo of herself posing alongside Melissa Claire Egan and Mark Grossman and teased, “I am really looking forward to you all seeing what the 3 of us have going on this Summer on #YR❤️ I have never worked with either of these phenomenal actors and it has been nothing short of amazing!! @mgrossman18 @missyclaireegan We had SO much fun on @thetalkcbstoday!! All 3 of us are bringing “bad” to the show! Everyone needs a little “bad”… right? #YR”

Michelle Stafford Is “Bringing Bad” To The Young And The Restless

It’s no secret a large percentage on Y&R fans have been slightly disgruntled over the state of storylines on the CBS soap opera, so fans could certainly use a “little bad” this summer.” What do you think of Michelle Stafford, Mark Grossman, and Melissa Claire Egan’s scenes so far? Let us know in the comments below.