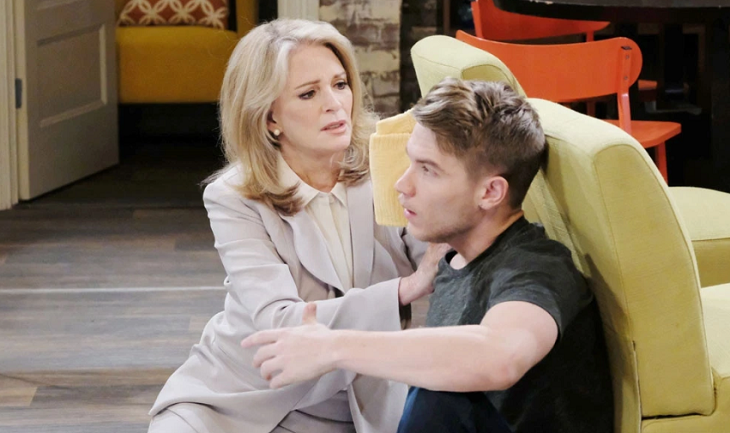 Rex tells Kayla about Sarah accepting a necklace from Xander Cook (Paul Telfer). Rex talks about having a big wedding reception. Rex plans to let Kate Roberts (Lauren Koslow) throw a wedding reception for him and Sarah. Rex is upset that Sarah accepted the necklace from Xander. Sarah doesn’t want to argue on their wedding night. Rex tells Sarah that Xander has branded her as his.

Sarah tries to explain that she couldn’t turn down the gift. Rex tells Sarah she needs to realize how dangerous Xander is. Sarah tells Rex about the conversation with Hope. Rex wonders if Sarah thinks Xander stole the necklace from Ted. Xander gets a text from Kate’s phone but says something isn’t right. Rex says the text didn’t end right, Sarah suggests Rex text Kate back. Rex and Xander go back to Eric Brady’s (Greg Vaughan) for their wedding night.

Days Of Our Lives Spoilers – Xander Cook Continues To Lie

Days of Our Lives Xander meets with Kristen Dimera (Stacy Haiduk) wants Xander to text Kate’s family, so they don’t worry about her. Xander didn’t take Kate’s phone, but lies and says he took it before he buried her and Ted Laurant (Gilles Marini). Xander says he has buried Kate and Ted in the woods outside of town. Xander tells Kristen they need to try not to kill anyone else. Xander gives Kristen back the gun and asks if she ever thought that Brady Black (Eric Martsolf) and Dimera aren’t worth this. Kristen accuses Xander of going soft and promises it won’t come back to bite them.

Days of Our Lives Ted tells Kate about his plan to get help. Kate doesn’t believe Hope Brady (Kristian Alfonso) is that good of a detective. Kate tells Ted he saw Xander give Sarah a gift. Ted says Hope will go after Xander as soon as she sees the necklace.

Ted tells Kate the food is probably poison and can’t believe he is eating it. Ted fakes poisoning to amuse himself and tease Kate. She believes Xander will decide to get rid of them. Kate tells Ted about being locked in the tunnels and almost dying before when trapped in the tunnels. Kate begs God not to let her die in the tunnels with Ted.

Days Of Our Lives Spoilers – Tripp Dalton Is Discovered

Days of Our Lives Marlena Evans (Deidre Hall) and Ben Weston (Robert Scott Wilson) find Tripp Dalton (Lucas Adams) knocked out on the floor. Tripp awakens and tells Ben and Marlena that Claire has Ciara Brady (Victoria Konefal). Hope arrives at the loft and Marlena and Ben explain what happened. Hope asks if they have any idea where the girls are, Ben, says criminals always return to the scene of the crime.

Kayla is keeping Tripp in the hospital overnight, he tries to leave, and Hope gets a location on Claire and Ciara. Kayla threatens to put Tripp in restraints if he doesn’t cooperate. Kayla explains that Claire is psychotic. Tripp talks about how he tried to ruin Kayla’s life. Tripp thanks Kayla for being the only mother he has ever known. Kayla tries to call Hope’s phone, but she doesn’t answer.

Days of Our Lives Claire has tied Ciara to a bed in the cabin she almost burned in before in the fire Claire set. Claire plans to end things there. Ciara encourages Claire to go back to make sure Tripp is OK. Claire says Tripp is either dead or going to turn her into the cops for attacking him. Claire believes she is going to jail either way and that Tripp doesn’t care about her; she owes him nothing.

Claire explains how Ciara looked when she got there. Claire hated Ciara and wanted to hurt her. Claire tells Ciara how smug and superior she was toward her. Claire knew Ciara was never going to stop taking things from her. Claire realizes she could stop Ciara; she saw the lighter and started the fire. Claire says Ciara would be out of her life forever. Claire says she came back to save her.

Ciara is upset that Claire lied about who started the fire. Ciara asks Claire why she tried to kill Tripp and Haley Chen (Thia Megia). Claire believes Tripp was running away with Haley. She wants Claire to get him; she refuses to return to Salem. Ciara wants to start over and fix things with Claire. Claire says her life is over and she’s taking Ciara with her. Claire goes outside and gets gasoline and pours it all over the bed and stands over Ciara with a lighter. Claire needs Ciara to go away.

Days of Our Lives Hope Brady (Kristian Alfonso) talks to Sarah at Doug’s Place about the necklace. Sarah thinks it could look like the one Ted bought for her. Hope tells Sarah about Ted’s phone call and his last text. Sarah tells Hope everything she knows and suggests Hope speak to Xander. Hope leaves to find Xander when Marlena calls her to come to the loft.