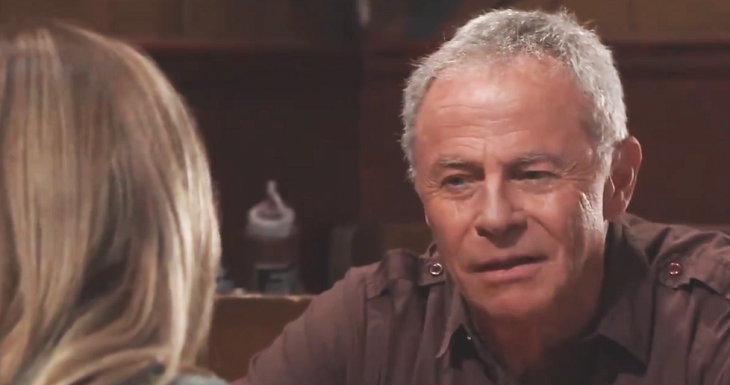 Jason teases Sam about snoring; she’s glad to wake up to him. Sam likes being in the safe house with Jason but wonders what he was thinking getting arrested in Beecher’s Corner. Jason praises Sam about her driving of the escape vehicle. Sam talks to Jason about running into Shiloh and overhearing Shiloh order his death. Jason plans to go back to Beecher’s Corner; Sam refuses to let him. She tells Jason no one in Beecher’s Corner knows her.

Sam reminds Jason she can be anything; she’s is a con. She plans to become a waitress in Beecher’s Corner. Jason wants Sam to get Carol Lockhart’s (Mandy Musgraves) statement so the PCPD can transport her to Port Charles to testify. Jason plans to be a witness; Sam tells him to stay at the safe house. Jason asks how Sam will keep him there. Sam and Jason wrestle before falling onto the bed and then begin to kiss.

General Hospital’s Michael Corinthos (Chad Duell) runs into Brad Cooper (Parry Shen) and Wiley Cooper-Jones (Theo and Erik Olson) outside Charlie’s. Michael reassures Wiley that they are going to protect him. Brad tells Michael that keeping Wiley might be more difficult than they think. Brad has plans to get fake passports. Shiloh Archer (Coby Ryan McLaughlin) calls Zara Amir (Maysoon Zayid), Shiloh has found his child. Shiloh plans to get DNA to prove Wiley is his child.

Jason and Sam are riding high after making the escape from Beechers Corners. How can they keep the momentum going? @kellymonaco1
Tune into a romantic, new #GH – STARTING NOW on ABC! @1SteveBurton pic.twitter.com/MK0yw8hOLu

Shiloh approaches Brad, who accuses him of stalking. He is glad to see the baby again. Brad tells Shiloh to stay away from his son, Shiloh keeps pushing. Shiloh talks about his son, who is almost Wiley’s age. Shiloh wants Brad’s help with what he needs for the baby. He brings up Lucas Jones (Ryan Carnes) and his attack last night. Shiloh doesn’t trust Lucas around Wiley. Shiloh keeps pushes until Brad leaves with Wiley but not before stealing a cloth he was chewing on to use for DNA testing.

Billy Price (Jonathan Stanley arrives at the PCPD asking for the police commissioner. Billy is looking for Jason but refuses to give them details. Michael walks in, and Billy says that is Jason’s accomplice. Mac laughs at Billy as Michael introduces himself. Billy insists that Michael be arrested for helping Jason. Mac refuses to arrest Michael with no evidence.

Billy threatens to call the FBI; Mac hands him the phone. Chase claims Michael was with him last night. Mac throws Billy out of the PCPD, and Michael explains that Billy is a member of DOD. Mac tells Chase he better not lie to him again, or he’s out. Laura shows up at the PCPD and Mac says he needs a new D.A., Robert walks in and informs then he is the D.A.

General Hospital’s Lulu is with Maxie and Peter August (Wes Ramsey) discussing her article. Lulu tells them about Dev (Aston Arbab) scaring the robber away from her house. Peter tells Lulu that he is pulling the story. Maxie points out that Lulu’s cover is blown and the story needs to end.

Peter refuses to support this article anymore; Lulu has a different address to use on her profile. Maxie tells Lulu she knows what she is doing. Lulu agrees that she misses her husband, but Peter agrees with Lulu, they have to finish this story. Peter tries to convince Maxie that Dante is trying to protect his family. Peter gives in and agrees to go with Maxie to find Dante.

General Hospital’s Drew Cain (Billy Miller) has Scout Morgan at the Aurora office. Alexis Davis (Nancy Lee Grahn) arrives to pick up Scout and talks with Drew about losing a child. Drew tells Alexis about Kim Nero’s (Tamara Braun) reaction to spreading Oscar’s ashes. Alexis reminds Drew they need to read Oscar’s will. Drew is surprised that Oscar thought of a will. Alexis tells Drew they need to schedule the reading of the will. Drew promises to take Scout to visit Oscar one day.