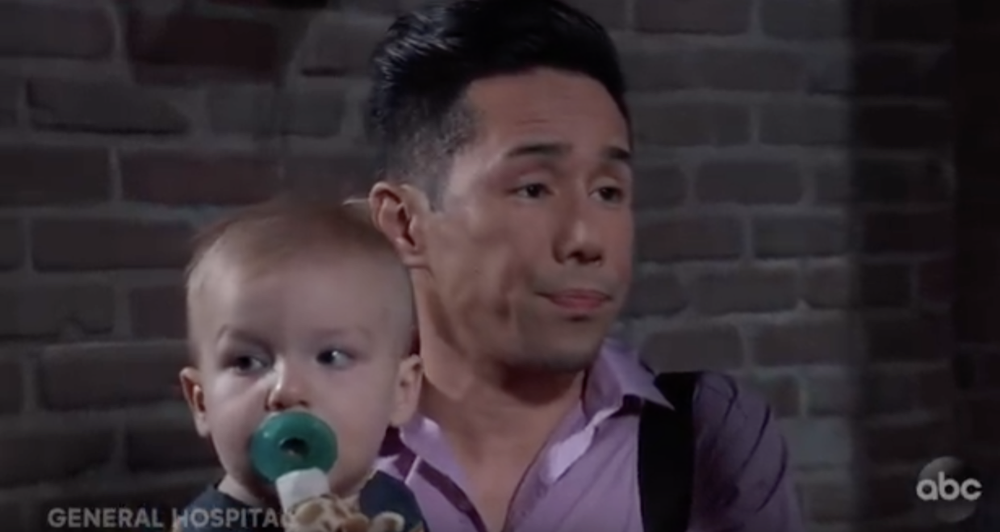 General Hospital spoilers tease that Shiloh Archer (Coby Ryan McLaughlin) has put two and two together and suspects that Wiley Cooper-Jones (Eric and Theodore) might be his son. A new promo released by General Hospital shows Wiley could be in danger more than ever!

Shiloh Archer Does not Know Wiley Cooper Is Jonah Corinthos

Of course Shiloh doesn’t know that the baby known as Wiley Cooper-Jones is really Jonah Corinthos, after the original baby died the day Brad Cooper (Parry Shen) brought him home from the hospital and he met Nelle Benson (Chloe Lanier) walking along the road in the country and thus the great baby switch happened about a year ago!

Brad Cooper Is Looking To Get Fake Passports

The spoiler video shows Brad, holding Wiley outside Charlie’s Pub, where Michael Corinthos (Chad Duell) comes out carrying a lunch bag and talks to Brad and Wiley; in particular, Michael tells Wiley that as his godfather he will do all he can to keep him safe.

Brad tells Michael that keeping Wiley safe is becoming more and easier said than done. It sounds like maybe Michael is planning to take Wiley for a while into hiding; however, after Michael leaves, Brad tells Wiley that although Michael’s intentions are good, they two are going inside Charlie’s Pub to talk to Julian Jerome (William DeVry) about getting him and Wiley some fake passports! Lucas Jones (Ryan Carnes) has already shot down the idea of going on the run with Wiley in Friday’s episode, but Brad isn’t listening!

Shiloh Archer Thinks He Knows Where His Son Is

Meanwhile, Julian is probably not at work because inside the pub, while Michael and Brad have been talking outside, Shiloh has been standing somewhere out of sight, possibly down a hall to the public restrooms talking on his phone to someone, probably his lawyer, and telling her he thinks he knows where his son is but doesn’t have proof yet.

As Brad walks into Charlie’s Pub looking for Julian, who would have rousted Shiloh out of the pub, Shiloh spots Brad with Wiley and says he can get proof as he stares at the baby! Will Shiloh try to make a grab, or will Brad try to make a run when he spots Shiloh?