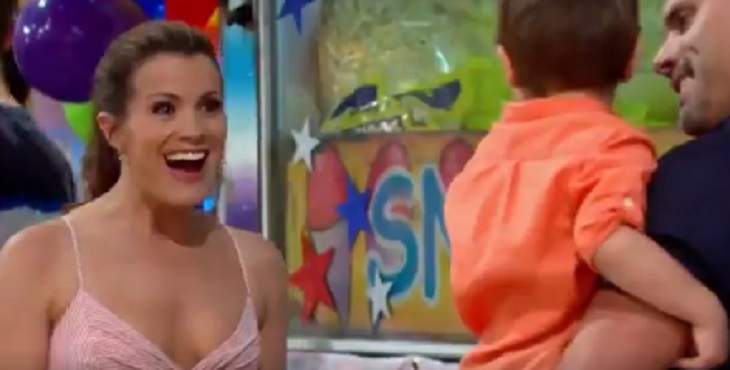 “The Young and the Restless” spoilers for Tuesday, July 2, tease that Chelsea Newman (Melissa Claire Egan) will reconnect with Nick Newman (Joshua Morrow). At the park, Chelsea can tell Nick’s lurking and calls him out of the bushes. Nick just wanted to check on Chelsea. Just because she broke his heart doesn’t mean he doesn’t care about her.

Chelsea regrets how everything went down and is grateful for the warning about Adam Newman (Mark Grossman). She apologizes for hurting Nick and hopes for forgiveness. Nick has more clarity on Chelsea’s trust issues now and eventually invites her to spend some time with Christian Newman (Jude and Ozzy McGuigen).

At the carnival, Chelsea chats with Christian. He recalls Connor Newman (Gunner and Ryder Gadbois) and Connor’s mommy. Chelsea notes that you don’t forget the people you love most. Meanwhile, Phyllis Summers (Michelle Stafford) blasts Adam at Dark Horse. She thinks Adam hired Kevin Fisher (Greg Rikaart) to kidnap her, but Adam sets her straight about it being Kevin’s plan.

Young And The Restless Spoilers – Phyllis Suspicious Of Adam And Kevin

Phyllis remains furious with Kevin, but Adam points out that Kevin works for them now. That leaves Phyllis suspicious of why, but Adam doesn’t share any details. Phyllis eventually shifts gears and announces a get-together that Adam’s going to throw. She makes a guest list and tries to get a message to Summer Newman (Hunter King).

Back at the carnival, Summer has some fun with Theo Vanderway (Tyler Johnson). They discuss Lola Rosales’ (Sasha Calle) bridal shower and how Summer doesn’t approve of marriage. Theo brings up Summer’s recent marriage to Kyle Abbott (Michael Mealor), which she acknowledges was a blunder.

After Summer comes out of a fun house with Theo, she ignores her phone messages. Over with Phyllis, she shows up at the carnival alone to play some games and take in the festivities. At Adam’s penthouse, he delivers Kevin’s next tasks. Adam wants Kevin to keep an eye on Chelsea and find out the name of the summer camp Connor’s staying at.

Kevin doesn’t want to get involved with anything that affects Connor, but Adam uses his leverage again. He points out that he has the power to lock Chloe up, so Kevin had better do what he says. A little later, Adam opens the door to see Chelsea’s new husband. Calvin Boudreau (John Burke) thinks they should talk, so it sounds like some tense scenes are coming up.

At Nick’s house, he opens up to Chelsea about the brewing custody battle over Christian. Chelsea suggests Adam intends to go after Connor as well, but she gets why he wants to. Nick feels they should team up and thwart Adam’s mission. Chelsea brings up her new hubby and notes that she doesn’t intends to stay in town long. When Nick asks to have dinner with her, Chelsea lets him know she’s free tonight.

At Society, Lola tries to soothe Kyle’s concerns about meeting her mother. Celeste Rosales (Eva LaRue) shows up soon after and hugs each of them. She wants to know about Kyle’s work, but he shifts the attention back to Lola and all her accomplishments. After Celeste insists on staying with Lola, Kyle suggests he can make sure everything’s ready when she arrives.

Lola hands Kyle her keys to cover up the fact that they live together. As Kyle leaves, he runs into Mariah Copeland (Camryn Grimes) and drags her off to help him. At the apartment, Mariah thinks it’s stupid to get rid of anything masculine and hide the truth. She pushes Kyle to just be honest with Celeste, but he’s only focused on the task at hand.

Kyle and Mariah get rid of all Kyle hints – except for a baseball cap that says “Ask my girlfriend.” Celeste enters right as they realize it’s still there, so Mariah slaps it on and gets grilled soon after. She fibs that her girlfriend, Tessa Porter (Cait Fairbanks), thinks it’s a hoot.

Young And The Restless Spoilers – Kyle And Lola Get A Shock

Once Mariah exits, Celeste tells Lola and Kyle she’s going to stay there until after the nuptials. She leaves the room for a minute, so Kyle and Lola bicker about how to handle this. Kyle suggests telling Celeste the truth, but she interrupts with the wedding book and wants to help out. Celeste also mentions how much she wants to meet the famous Abbott clan.

“The Young and the Restless” spoilers say some great scenes are coming up. We’ll give you updates as other Y&R news and rumors emerge. Stay tuned to see what’s next in Genoa City.

So Y&R fans, what do you think about these “Young and the Restless” spoilers?