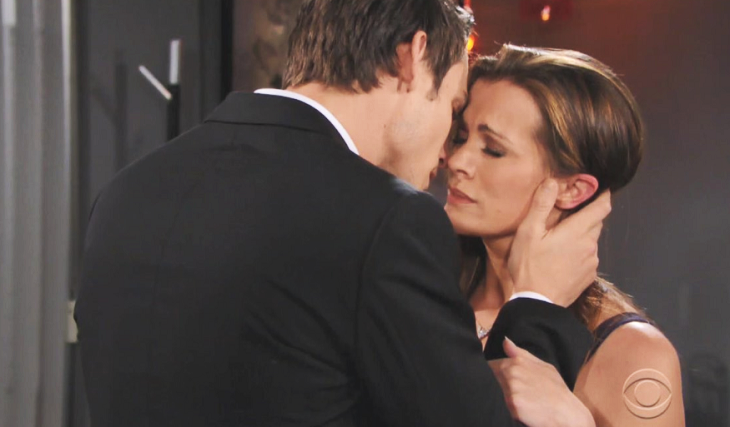 The Young and the Restless spoilers tease that Chelsea Newman (Melissa Claire Egan) wasn’t conning anyone in previously stating that she got married. According to Soap Opera Digest, her husband, Calvin Boudreau (John Burke), will first be seen on July 2.

So, Chadam has been replaced by Chalvin, or Celsea if one prefers. And with that, Adam Newman’s (Mark Grossman) next rival, who is also Connor Newman’s (Gunner and Ryder Gadbois) adopted father, will be defined. The unexpected pressure that will be pressed into Adam’s psyche due to this new guy will be undeniable and create a response.

Of course, Chadam can revive as time advances in Genoa City, Wisconsin. The calendar reference is apt because viewers know that Y&R actually spun the soap opera rapid aging syndrome 180 degrees when it wrote the latest version of Adam as a younger man than he was when last seen in September 2016. He’s become generally chronologically accurate, based on when the character was born in the 1990’s.

As for Chelsea, Egan is always a pleasant sight to see. She’s a solid actor whose character is complex, dynamic, and fully woven into the tapestry of this fictional town.

In deciding to write Adam back into the story earlier this year, TPTB also chose to build off where this character’s storyline was three years ago. The writing staff smartly fast-forwarded past the need to have an extended memory recovery plot and instead used Chloe Mitchell (Elizabeth Hendrickson) to jolt his brain via a shot to the gut.

Adam’s recent attempts to contact Chelsea were based on his ongoing love for his assumed wife and a pressing desire to reconnect with his first-born son. Chelsea’s arrival at the Dark Horse head office is fitting, as it positioned her between two recent loves, Adam and his leading sibling rival, Nick Newman (Joshua Morrow).

Young And The Restless Spoilers – Custody Battle Is Coming

The coming battle for custody of Christian Newman (Jude and Ozzy McGuigen) has been teed up. Chelsea’s comeback means that she’s available to testify in court about all matters related to Christian’s previously known biology, along with her tells about Adam and Nick’s roles as fathers.

Because Nick is currently single, it’s fair to assume that Chelsea could choose to revive Chick, instead of Chadam. Again, this assumes that the nuptial link to Calvin won’t last.

Young And The Restless News: Fans Are Still Debating Who Is Responsible For Delia’s Death—Billy Or Adam! https://t.co/ZuiWgSnIwD pic.twitter.com/Q3SDTRnKvv

Chadam isn’t possible as of early July. But give Adam time. He will not accept blocked, or even limited access to either of his sons and in lieu of starting some other relationship, which can’t be discounted, he’ll also want Chelsea back.