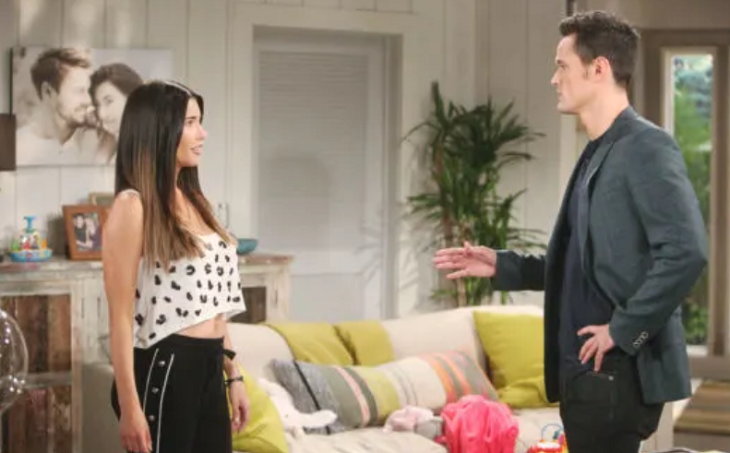 The Bold and the Beautiful spoilers tease that many people have experience with siblings interfering in their personal lives. But what Thomas Forrester (Matthew Atkinson) just did to his sister Steffy Forrester (Jacqueline MacInnes Wood) could be classified, among other tags, as criminally overbearing.

Thomas’ drugging of Liam Spencer (Scott Clifton), intended to force Steffy to re-couple with him, represents an outrageously brazen act. However, with whatever the effects, Steffy is likely to subtract from her family in the near future.

Bold And The Beautiful Spoilers – Keeping Truth From His Sister

Digitally skipping backwards for perspective, Miss Forrester was married to Liam at this time last year. Their tumultuous relationship was badly damaged by his father’s obsession with Steffy, eventually leading to Steam’s break. Steffy told Liam to be with Hope Logan (Annika Noelle). He was reluctant, but listened to one of his great loves and went to be with the other.

Bold And The Beautiful Spoilers: Brooke’s Life In Danger As She Becomes Thomas’ Next Target

Down to two people at the cliff house, then adding Phoebe, Steffy now stood as a member of three. However, Hope followed in Steffy’s path by telling Liam that he should be with the mother of his children. Yes, Hope sees both girls as Liam’s responsibility, without even realizing that Phoebe is their daughter, Beth Spencer.

Thomas knows that Phoebe is Beth, but rather than do what any normal brother would, bee-lining to Steffy and breaking the news, he’s crafted a cunning, multi-pronged scheme. In Thomas’ world, keeping the truth from Steffy will allow him to become Hope’s next husband, thereby giving Douglas Forrester (Henry Joseph Samiri) a new mom.

Of course, Thomas is wronging the woman he claims to have loved for years, Hope, and her true love, Liam, along with Phoebe-Beth. But he doesn’t care. As Thomas has relayed to the three secret-keepers, everyone is better off by forwarding the lie that Beth died on Catalina Island. In reality, only he’s better off, as the forwarding of that tale keeps Hope grieving. It also positions Liam with Steffy, enables the bond between Douglas and Hope to grow, and enables what wouldn’t be otherwise possible, Hope giving Thomas a chance to be with her at some point.

It’s seemingly destined that Steffy will need to subtract from her life shortly. Unless Hope suffers Emma Barber’s (Nia Sioux) fate, which B&B fans are surely hoping isn’t possible, then Phoebe will revert to Beth and be with her birth mother.

Bold And The Beautiful Spoilers: Thomas Proposes To Hope, His Manipulations Working But What Will It Cost Him? #bb #boldandbeautiful https://t.co/GZMnyacCWK

So, Steffy had Liam. She later added Kelly and Phoebe. Liam recently accepted his former wife’s offer to move back into the cliff house, which pushed the total number of residents at that prime location to four. But Thomas’ activity is bound to be exposed, which will at least subtract Phoebe from Steffy’s count and maybe, Liam as well.