Bold And The Beautiful Spoilers Wednesday, July 3: Hope And Liam Argue – Steffy Calls Out Thomas On His Plot To Get Hope 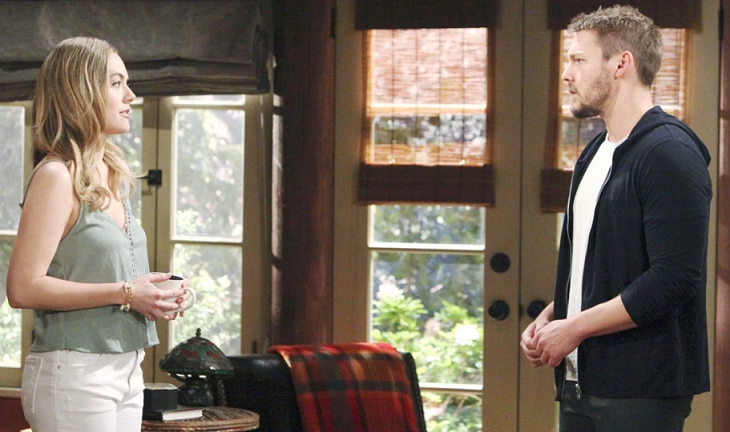 The Bold and the Beautiful spoilers for Wednesday, July 3, tease that Hope Logan (Annika Noelle) and Liam Spencer (Scott Clifton) will continue their awkward conversation about Liam’s night with Steffy Forrester (Jacqueline MacInnes Wood). As B&B viewers know, Liam just told Hope that he and Steffy had sex, and Hope is horrified.

Of course, Liam feels terrible about the whole situation, as the last thing he wants to do is to hurt Hope. He just wanted to be honest with her about what was going on in his life, and it was certainly difficult for Hope to hear, even though she’s the one who ultimately wanted to end their marriage.

The Bold and the Beautiful spoilers say that the conversation between Liam and Hope will take an angrier turn on Wednesday’s episode, as the topic turns to the presence of Thomas Forrester (Matthew Atkinson) in Hope’s life. Hope might insinuate that she’s going to move on with her life, too, and Liam probably won’t like the sound of that, since “moving on” will likely involve Thomas.

As B&B viewers know, Liam doesn’t trust Thomas and he doesn’t appreciate how Thomas put the moves on Hope while he and Hope were still married. Look for Liam to warn Hope about Thomas once again, and for a big argument to ensue. Liam will say that he doesn’t appreciate how Thomas keeps parading Douglas Forrester (Henry Joseph Samiri) in front of Hope, and this will probably irritate Hope, who won’t like Liam’s suggestion that Thomas is using his own son.

At any rate, it doesn’t look like Hope and Liam will end this conversation on good terms, and this will no doubt play right into Thomas’ hand. Thomas has been wanting Hope to finally get to the point where she’s ready to move on from Liam, and this big argument might push her heavily in that direction.

Next, on Wednesday’s new episode of B&B, Steffy will continue her conversation with Thomas at the cliff house. Thomas is feeling happy and smug, since he found out that Steffy and Liam slept together. He’ll feel that his decision to drug Liam’s drink was the right one – after all, everything worked out just as he wished.

Bold And The Beautiful Spoilers – Plan Working Out Perfectly

But Steffy will have some harsh words for her brother. Of course, she doesn’t know that Thomas drugged Liam’s margarita, but she is aware that Thomas has been doing what he can to drive a wedge between Hope and Liam. On Wednesday’s episode, she’ll call out her brother’s actions, but chances are it won’t deter Thomas any.

In fact, Thomas will be even more determined to get Hope for himself after visiting with Steffy. He’ll feel emblazoned, like his plan is working out perfectly. And according to B&B spoilers, the next step will be to get Hope to commit to a relationship with him.

Look for Hope, Thomas, and Douglas to spend the 4th of July together, and according to B&B spoilers, Thomas will get Douglas to help him pop the big question to Hope. It is sure to be a holiday to remember!

Be sure to tune in on Wednesday to catch up on everything happening on B&B right now. In the meantime, keep up with Hollywood Hiccups for all the latest news and updates on all of your favorite daytime television shows right here.