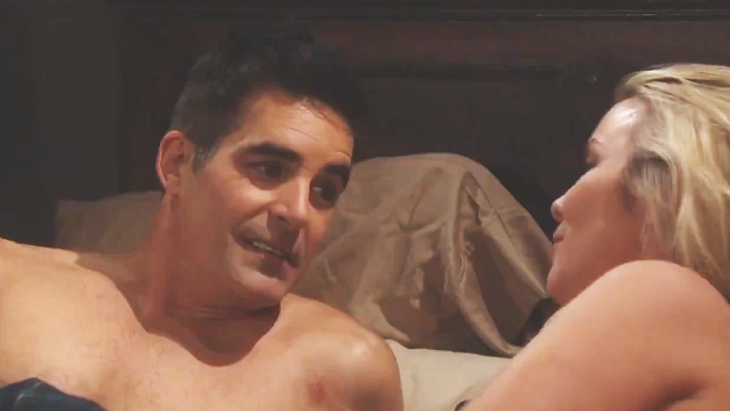 Days of Our Lives spoilers tease that newly single former flames Rafe Hernandez (Galen Gering) and Carrie Brady (Christie Clark) will reconnect this week. Rafe and Carrie do have a history of attraction going back several years, and did have a short fling while he was still married to Sami Brady (Alison Sweeney), her half-sister.

Carrie was still married to Austin Reed (played by Patrick Muldoon during that time) and they both ultimately decided to go back and try to make things work with their respective spouses.

Carrie is a lawyer, and apparently has some expertise in family law and adoption, and she and Rafe run into each other in Brady’s Pub. Rafe talks to her about his dilemma with baby David Ridgeway (Dexter and Jaxton Ellis) and needs legal help, and she agrees to advise him.

Days Of Our Lives Spoilers – Pair Share An Instant Connection

It’s like the two have never been apart, and there is an instant inward connection between them. Of course, as Days of Our Lives viewers will recall, Rafe and Sami ultimately divorced and then Rafe married Hope Brady (Kristian Alfonso).

Days Of Our Lives Spoilers: 5 Key Weekly Takeaways From DOOL July 1 to July 5

Hope was Carrie’s aunt by marriage when Bo Brady (Peter Reckell) was alive, and when Bo was with Billie Reed (Lisa Rinna) he was still her uncle but also her brother-in-law, since Carrie’s husband Austin was Billie’s brother.

Well, Days of Our Lives IS a soap opera! Since Rafe and Carrie’s fling in the late 2010s, both have divorced, with Hope and Rafe’s divorce of course being quite recent.

Days Of Our Lives Spoilers – Both Are Now Divorced And Single

Rafe and Carrie will catch up on each other’s lives and will undoubtedly discuss what went on between them before, and what has happened ever since with both. Rafe will tell Carrie that he is divorced now from both Sami and Hope, and Carrie will tell Rafe that things didn’t work out between she and Austin either, and that they are now divorced.

Rafe will comfort Carrie about her apparently also recent divorce from Austin, probably giving her a hug, and that will lead to a kiss, and their old feelings and deep attractions for one another will reignite!