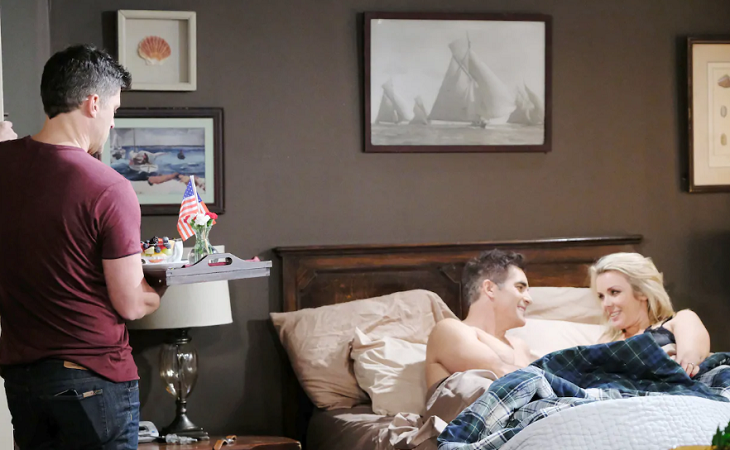 “Days of Our Lives” spoilers for Wednesday, July 3, tease that Rex Brady (Kyle Lowder) will surprise his new wife with a fun suggestion. He’ll tell Sarah Brady (Linsey Godfrey) that he’d love to throw a Brady-Horton barbecue for Independence Day. Rex will think it’d be great for them to carry on the tradition and have a little celebration to honor their marriage.

DOOL fans can expect Sarah to get on board, so they’ll throw together a bash for the Fourth of July this Thursday. Meanwhile, “Days of Our Lives” spoilers say Ciara Brady (Victoria Konefal) will discover a shocker. She’ll take a look at Claire Brady’s (Olivia Rose Keegan) cell phone and realize Eve Deveraux’s (Kassie DePaiva) been holding out on them.

Eve really should’ve intervened when she found out Claire was out of control. This girl’s been setting fires right and left, but Eve was more concerned about her own agenda. Ciara will naturally have a big problem with that.

The same goes for Hope Brady (Kristian Alfonso) and Ben Weston (Robert Scott Wilson), who will have a confrontation with Eve on Wednesday’s episode. John Black (Drake Hogestyn) and Marlena Evans (Deidre Hall) will hit the roof as well, so Eve will have plenty of enemies.

It won’t be long until Eric Brady (Greg Vaughan) inadvertently bursts their bubble. “Days of Our Lives” spoilers say Eric will accidentally barge in, but at least it seems they’ll be done by the time he arrives!

Days Of Our Lives Spoilers – Hope Brady Will Be Crushed

However, Eric won’t be the only one who discovers Carrie and Rafe’s steamy connection. Hope will be crushed when she sees Rafe coming out of Carrie’s room.

She’ll also overhear Carrie talking about their hot moments, so she’ll get confirmation on her suspicions. “Days” spoilers say Hope will have to wrap her head around Rafe moving on.

Back at the hospital, Belle Black (Martha Madison) will arrive to comfort her daughter. She’ll join Shawn Brady (Brandon Beemer) as they try to put their own guilt aside and focus on supporting Claire. After Claire’s sedated, she’ll finally get some rest and prepare for the necessary treatment ahead.