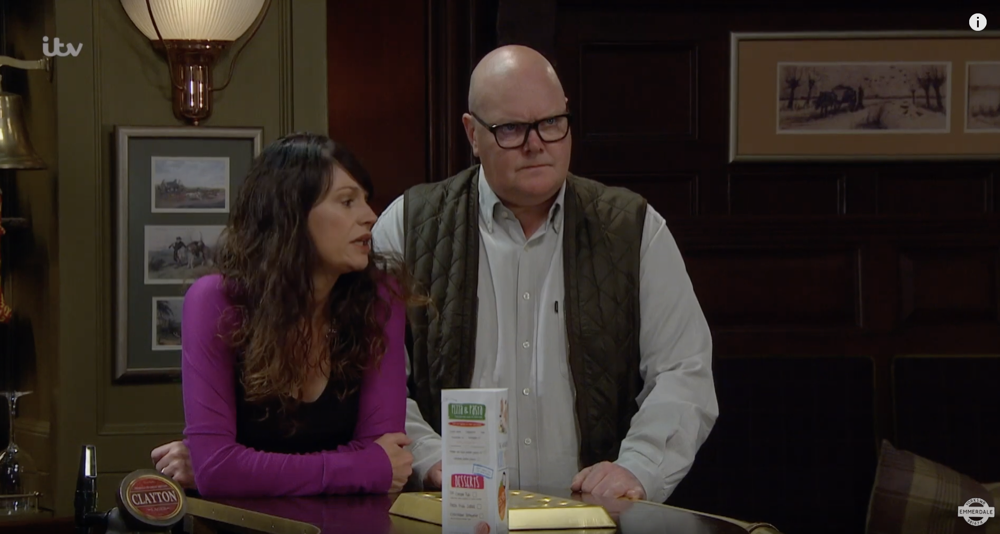 Despite having decided to wait until their baby was born to find out if they were having a girl or boy, Chas Dingle (Lucy Pargeter) and Paddy Kirk (Dominic Brunt) were told the news that they were expecting a baby boy by no other than his dad, Bear Wolf (Joshua Richards).

At first, the pair were not happy about how they found out about their baby’s sex, but it didn’t take too long for them to get excited at the thought of having a little baby boy. However, the couple might be getting another shock as they might not be expecting a baby boy after all.

After the tragic death of baby Grace, Chas and Paddy are expecting another child. After the couple got the gender of their unborn child on the scan, they made a mutual decision to wait until the baby comes out to know its gender. So, they left the scan on Grace’s grave in hopes that their baby in heaven will be the only one who knows their secret. However, the sonograph found its way to Bear, who then relays the news to Faith Dingle (Sally Dexter). The news eventually reaches the parents, who didn’t want to know about it at this point in time.

Although they were disappointed that things didn’t go as planned, they eventually became excited at the thought of having a baby boy. So, Chas decided to share the good news to all their friends and family, who attended Paddy’s 50th birthday celebration.

But since this is “Emmerdale,” there will always be a twist. Faith discovered that Bear mistakenly bought a grandfather birthday card for Paddy, which made her realize that Bear cannot read. She then confronted him and asked how he knew that Chas and Paddy were having a baby boy if he doesn’t know how to read.

TONIGHT: Can Faith convince Eric to forgive her? #Emmerdale pic.twitter.com/d5D1iwb2sb

After Bear admitted that he just made a guess, Faith wanted to tell the truth to the couple. However, Bear convinced her not to. “It’s 50-50, isn’t it?” he argued. “I mean, look at them, they’re so happy. Chances are I’m right and they need never have to know. Please, Faith. They’ll hate us for it.” Will Chas and Paddy find out the truth?