Young And The Restless Spoilers & Recap Tuesday, July 2: Chelsea And Nick Catch Up – Adam Has Another Job For Kevin 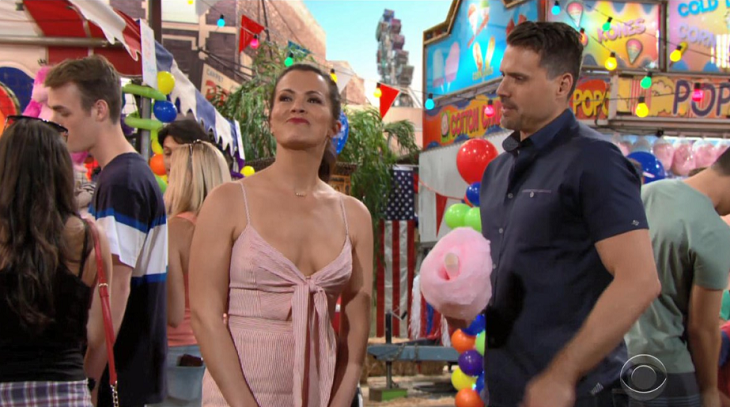 “The Young and the Restless” (YR) recap for Tuesday, July 2, 2019 reveals that over in Chancellor Park, Chelsea Newman (Melissa Egan) calls out, “I know you’re there, Nick.” Nick Newman (Joshua Morrow) emerges from the bushes. She presumes he wants some answers. Nick wanted to make sure she’s okay. Chelsea admits she should have handled things better and thanks him for warning her about Adam Newman (Mark Grossman). Nick shrugs; just because she broke his heart doesn’t mean he wouldn’t worry about her.

Chelsea’s sorry she hurt him; she tried to forget him but couldn’t. He matters to her more than anybody and she hopes he’ll forgive her. Nick understands her lack of trust better now and tells her he’s happy. When Chelsea mentions Christian, he invites her to see him.

Adam Newman storms into Dark Horse where Phyllis Summers (Michelle Stafford) confronts him about her kidnapping and asks, “Kevin? Is that all I’m worth to you?” They spar verbally. Phyllis tells him to aim higher when he hires henchmen. Adam confesses the kidnapping was Kevin’s idea – he believed they were a couple and thought he was getting to Adam, who he still blames for the past.

Young And The Restless Spoilers – Phyllis Summers Is Fuming

Phyllis fumes, “Wait until I get my hands on him.” Adam alludes to Kevin Fisher’s (Greg Rikaart) skills and explains he works for them. Phyllis is suspicious. Adam won’t divulge why Kevin’s compelled to do his bidding. Phyllis informs Adam he’s hosting a gathering at his place tonight. Once alone, Phyllis compiles a guest list and tries leaves Summer a message.

At Society, Y&R’s Lola Rosales (Sasha Calle) assures Kyle Abbott (Michael Mealor) that her mother will love him, but he’s nervous about making a bad first impression. Lola kisses him. Celeste Rosales (Eva LaRue) arrives, hugs Lola, then meets Kyle and throws her arms around him. She thinks they are beautiful together and grills Kyle about his work. Kyle switches gears to what Lola’s accomplished.

He pastes on a smile when Celeste reveals she plans to stay with Lola, and tries unsuccessfully to convince her to stay at the GCAC. When he offers to make sure the place is ready, Lola gives him ‘her keys’ and he takes off, enlisting Mariah Copeland’s (Camryn Grimes) help outside. Inside, Lola tells her mother that Kyle’s nothing like Dad, then apologizes for bringing it up. Celeste is buoyed that Lola’s found success and happiness.

Summer Newman (Hunter King) and Theo (Tyler Johnson) stroll around the carnival. Over ring toss, Summer declares this is the best Fourth of July ever. She rants about Lola Rosales’ bridal shower – she couldn’t wait to get out of there and feels marriage is a bad idea. Theo notes she shackled herself to Kyle. Summer insists it was a mistake. They move on to the fun house.

Later, Nick  and Christian meet Chelsea there. Christian remembers Connor’s mommy and Connor. Chelsea says you never forget the people you love the most. When Chelsea expresses regret, Nick assures her they’re okay and invites her to his house.

They leave, and Summer and Theo emerge from the fun house. Summer has messages from Phyllis and Billy Abbott (Jason Thompson) and deletes them both. Eventually, Phyllis arrives at the carnival and plays games alone.

Young And The Restless Spoilers – Hiding Truth From Her Mom

At Lola and Kyle’s apartment, Kyle coaches Mariah Copeland to remove everything masculine. Mariah remarks it’s not 1955 and thinks they should tell Mrs. Rosales the truth. Kyle plans to stay in the pool house a few nights and says, “Work!” Soon, Celeste Rosales and Lola arrive and Mariah slaps Kyle’s ball cap on as introductions are made.

Once Mariah’s gone, Celeste lets them know she’s excited for them to live together after the wedding…she’ll be staying until then. Kyle and Lola whisper while Celeste’s in the bedroom. Lola suggests they get married tomorrow; problem solved. Kyle wants to tell the truth. Celeste emerges with Kyle’s wedding plans book and declares they’ll all do this together. She wants to meet the famous Abbotts.

At the penthouse, Adam updates Kevin that Chelsea’s in town and says he’s to follow her and find out the name of Connor’s summer camp. Kevin insists Connor’s off limits. Adam orders him to get him what he wants, or he’ll have Chloe Mitchell (Elizabeth Hendrickson) locked up.

Later, there’s a knock. The man introduces himself to Adam as Chelsea’s husband, Calvin Boudreau, (John Burke), and he wants to talk.

At Y&R’s Nick’s place, brings up the custody issue with Adam. Chelsea reveals he’s threatening to take Connor away, though she gets it; he was Connor’s hero. Nick suggests they stick together and stop Adam in his tracks.

Young And The Restless News: Fans Are Still Debating Who Is Responsible For Delia’s Death—Billy Or Adam! https://t.co/ZuiWgSnIwD pic.twitter.com/Q3SDTRnKvv

Chelsea talks about her kind, gentle husband, Calvin, who knows some of her past; she won’t be sticking around. Nick asks her out for dinner. She’s free tonight. And that’s a wrap.