Bold And The Beautiful Spoilers & Recap Wednesday, July 3: Thomas Pushes Steffy To Admit The Truth – Hope Wants To Move On 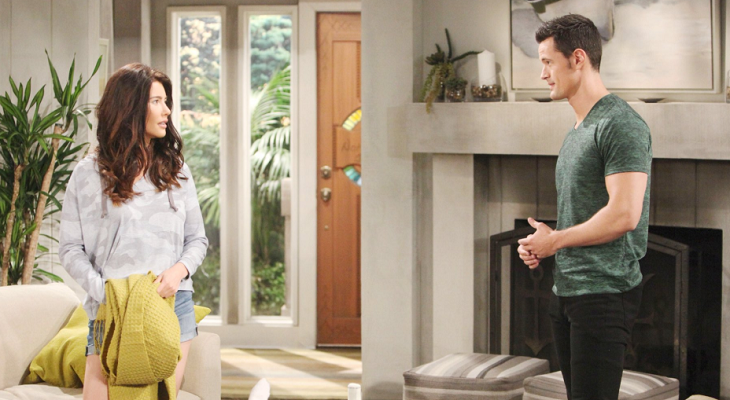 “The Bold and the Beautiful” (BB) recap for Wednesday, July 3, 2019 reveals that over at the cliff house, Thomas Forrester (Matthew Atkinson) pushes Steffy Forrester (Jacqueline MacInnes Wood) to admit that she and Liam Spencer (Scott Clifton) have reunited. Steffy notes accusingly, that if things work out with her and Liam, it makes things easier for Thomas with Hope Logan (Annika Noelle).

Thomas concedes it’s true. She doesn’t think his relationship with Hope should hinge on Liam being with someone else. Ridge Forrester (Thorsten Kaye) arrives, and Thomas congratulates Steffy once more before taking off. Ridge fishes for information. Steffy groans and says Thomas is happy that things are progressing for her and alludes to ‘things happening’ last night.

B&B’s Ridge clears his throat; he’s happy for her. Steffy’s a little surprised and wonders if he’s going to use the ‘D’ word. Ridge knows what it’s like to love someone and never stop; she has her family back and call it what you want, but that’s real.

They bicker about Liam having gone to see Hope. Steffy reminds her father it was one night, but Ridge feels it’s a new beginning for them. Steffy’s confident where this is going because they all want the same thing.

In the cabin, B&B’s Hope insists to Liam  that she’s fine and she wanted him to be with the mother of his children. She wishes it was her, but some things aren’t meant to be. Liam clarifies that he wasn’t himself and allowed things to happen he wouldn’t have otherwise. Hope knows him and knows it had to have meant something.

Hope declares it wasn’t a hook-up; he made love to Steffy, he wanted her. She misses him every day, but he has a new life to live. Thomas Forrester enters bellowing, “Honey I’m home!” He asks if he’s interrupting and Liam says he sure is.

Bold And The Beautiful Spoilers – Liam Spencer Has Moved On

B&B’s Thomas asks if Hope’s alright. She will be; it’s a lot to process. Thomas plays dumb. Hope explains something happened last night between Steffy and Liam. Thomas reminds her that’s what she wanted, then turns on Liam for coming to rub it in Hope’s face. Liam fumes. They spar verbally until Hope interjects that she and Liam need to talk alone. Thomas will be at the house.

Liam complains about her trusting Thomas and feels it’s not too late. Hope exclaims that he moved on, and fast. Liam doesn’t want her to be in pain. She pleads with him to let her go. Liam’s trying but, she has to be careful. He says she is vulnerable and Thomas is manipulating.

If the right guy came along, he’d support it, but not him. Hope’s appalled he believes Thomas is an evil, bad guy. Liam asks if she loves him. She doesn’t; he isn’t Liam, but she can’t have him. They can both have their families. Liam says it was supposed to be them. Hope wishes Beth was alive every moment, but some dreams aren’t meant to come true. They must go their separate ways and will always love each other. And that’s a wrap.