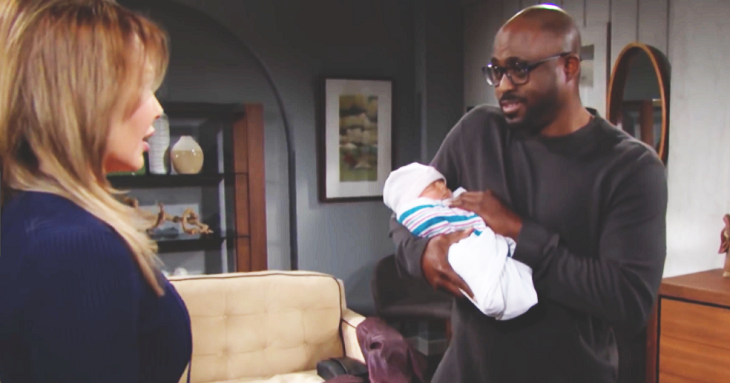 The Bold and the Beautiful (B&B) spoilers tease that the baby secret will be revealed in the coming weeks. And, that’s not all, it sounds like part of the reveal might lay in Taylor Hayes’ (Hunter Tylo) hands.

Taylor worked with Reese Buckingham (Wayne Brady) to arrange what she thought was Flo Fulton’s (Katrina Bowden) baby’s adoption. As it turned out, Flo was not the birth mother and only paid to pretend to be.

Reese switched Hope Logan’s (Annika Noelle) baby with a dead baby and sold the infant to Steffy Forrester (Jacqueline MacInnes Wood) to pay off his gambling debts. With Taylor off the canvas, there’s no one to talk about Reese’s involvement in the baby adoption and to put the pieces together.

However, that will be change soon. Tylo has teased she could be returning to B&B soon, but she couldn’t exactly give any real details. It’s pretty clear Taylor’s return is needed to blow this baby secret out of the water.

The Bold and the Beautiful Rumors: Quinn Learns About the Baby Switch, Goes Ballistic

It’s possible that Liam Spencer (Scott Clifton) will find out the truth or even someone may tell Hope. Thomas Forrester (Matthew Atkinson) has known about the baby scoop for quite some time. He struggled with what to do but found himself in an impossible situation.

Bold And The Beautiful Spoilers – Storyline Is Moving Along

If he told his sister, she would lose a daughter, but Hope would be reunited with her baby. If he didn’t say anything, Steffy would be happy but Hope would forever be broken by Beth’s fake death.

The storyline is moving along and waiting for Taylor to come back and reveal that Reese arranged the adoption and made her promise to never tell anyone he was involved in any way.

Taylor: “Should I burn this guy’s pic with my daughter or use it for target practice?” pic.twitter.com/SR0jtcJ7iZ

If that part of the story gets out, it wouldn’t take much to piece together the truth and figure out that Reese stole Hope’s baby and concluded that Beth is alive and living with Steffy as Phoebe Forrester.

Do you miss Taylor on B&B? In the meantime, keep up with Hollywood Hiccups for all the latest news and updates on all of your favorite daytime television shows right here.