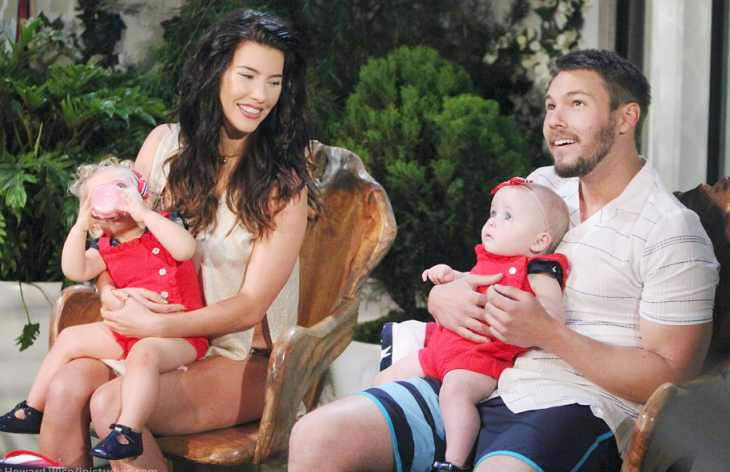 The Bold and the Beautiful spoilers for Thursday, July 4, tease that Liam Spencer (Scott Clifton) and Steffy Forrester (Jacqueline MacInnes Wood) will do their best to plan a fun and festive Fourth of July celebration for the girls.

As B&B viewers know, Liam has just had a serious and very final conversation with Hope Logan (Annika Noelle), during which he told Hope about sleeping with Steffy.

And after all of that, Liam will be feeling melancholy. He’ll want to celebrate the holiday with Steffy, Kelly Spencer (Chloe Teperman and Zoe Pennington), and Phoebe Forrester (River Davidson and Madeline Valdez), and this will lift his spirits a bit, but he’ll still have the conversation with Hope in the back of his mind.

According to B&B spoilers, Steffy will do her best to console Liam as he reflects on the end of his marriage to Hope. He’ll also remember back to last year’s 4th of July celebration, when Hope first told him she was pregnant with their daughter. He’ll sadly marvel at how different things are this year, and Steffy will do her best to offer support.

Meanwhile, on Thursday’s new episode of B&B, Thomas Forrester (Matthew Atkinson) will enact another sneaky plan. He’ll be feeling awfully smug and satisfied about how his last plan worked out – B&B viewers will remember that he drugged Liam’s drink, which resulted in Liam and Steffy sleeping together. It was exactly what Thomas wanted, and now he’ll be onto a new plot.

But for this plot, he’ll decide he needs a little assistance in the form of his son Douglas Forrester (Henry Joseph Samiri). Thomas wants nothing more than for Hope to accept his standing marriage proposal, but Hope had previously balked at the idea because she was still in love with Liam and just wasn’t ready to move on yet.

But given that Liam and Steffy slept together, Thomas will figure that Hope may be more willing to accept his proposal now – that is, if the proposal is done just right. Thomas will decide that the proposal would best come from Douglas. After all, Hope loves Douglas and she finds it very hard to say no to him.

Of course, Douglas truly loves Hope, so it probably won’t be too difficult to convince him to make the big proposal. Look for Douglas to pop the big question soon to a very surprised Hope, who will be much more receptive to the proposal this time.

Be sure to tune in on Thursday to catch up on everything happening on B&B. In the meantime, keep up with Hollywood Hiccups for all the latest news and updates on all of your favorite daytime television shows right here.