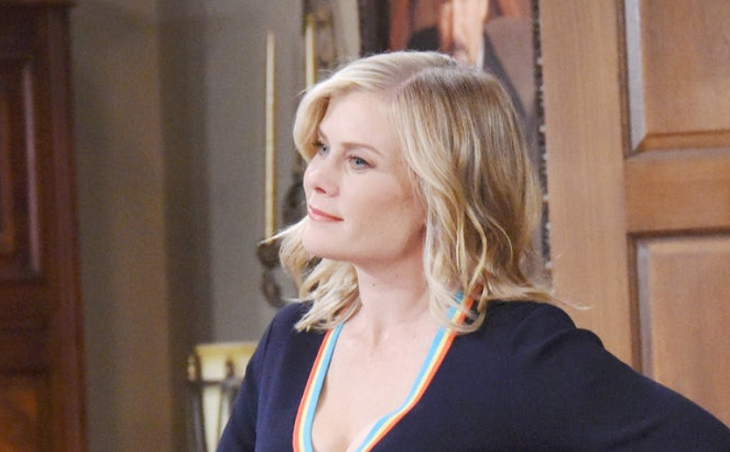 Fans of Sami Brady will have to say goodbye to the character once again as her portrayer Alison Sweeney has wrapped up her return to the NBC daytime drama.

Sami once again leaves Salem and heads back to her three kids Johnny, Allie, and Sidney who live in California. It was also revealed during her latest return to the soap that her husband, EJ DiMera (James Scott), is alive and with them.

Viewers may recall that Sami returned to Salem to offer support to her oldest son, Will Horton (Chandler Massey), who had been diagnosed with a brain tumor, which kept on growing. Will’s condition was getting worse by the day. He was struggling to form sentences and his memories were fading.

Days Of Our Lives Spoilers – Doctors Had Lost All Hope

Doctors had lost hope as well and said he only had days to live. It was Dr. Marlena Evans (Dedrie Hall) who finally made the decision to ask Will’s mother, Sami, and father, Lucas Horton (Bryan Dattilo) to come home for their son.

After being informed of Will’s condition, the pair rushed back to Salem. At the time of their return, Dr. Rolf’s Wilhelm Rolf’s (William Utay) journal was discovered and it contained everything that was needed to save Will’s life.

Now that Will is no longer at death’s door, Sami is ready to go home to her family in California. Although she’s leaving, her sisters will find themselves in the middle of a major drama. Viewers might recall that Carrie Brady (Christie Clark), Sami’s older sister, recently returned to Salem.

She came back to pay tribute to her late grandmother, Caroline Brady, who was portrayed by Peggy McCay for decades before passing away last year. Carrie appeared on the soap’s July 2 episode and shared scenes with Galen Gering, who plays Rafe Hernandez, as the two, who were once romantically involved, reconnected.

On July 3, Martha Maddison will return to “Days of Our Lives” for a few episodes as Belle Brady. She, along with Shawn Brady (Brandon Beemer), will make their appearances on the show as their on-screen daughter Claire Brady (Olivia Rose Keegan) suffers a psychiatric breakdown.