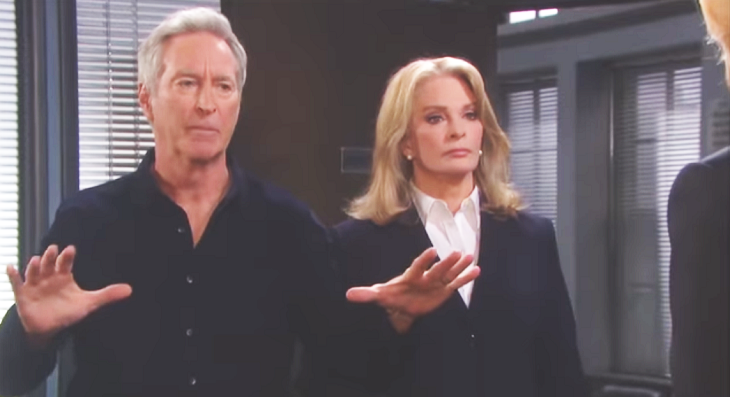 Days of Our Lives (DOOL) recap for Wednesday, July 3, 2019, reveals Belle Black (Martha Madison) arrives in Salem to find her daughter in a mental ward. John Black (Drake Hogestyn) and Marlena Evans (Deidre Hall) try to tell Belle what happened; she accuses them of lying.

Days of Our Lives Shawn is sitting when Claire when Ciara Brady (Victoria Konefal) comes to check on her. Ciara tells Shawn that Ben has saved her three times. Shawn agrees that Ben has changed and hope the charges are dropped soon. Shawn tells Ciara about the call from Eve Deveraux (Kassie DePaiva) to Claire’s phone. Ciara grabs Claire’s phone on the way out the door.

Days Of Our Lives Spoilers – Ciara Brady Discovers A Secret

Ciara listens to Eve’s message and figures out she knew about Claire. Ben Weston (Robert Scott Wilson) arrives at the hospital, and Ciara plays Eve’s message for him. John and Marlena hear Ciara saying Eve knew all along. Ben starts to head to the police station, John and Marlena go instead. Shawn talks to Claire about sailing. Shawn apologizes for not being there for her. Belle arrives and lets Shawn knows she’s has been updated. Belle speaks to Claire and tells her she loves her.

Days of Our Lives Rafe Hernandez (Galen Gering) wakes up to find himself in bed with Carrie Brady (Christie Clark). Rafe asked how this happened. Carrie reminds him of their kiss. Rafe says he needs to go, Carrie asks if she’s sure. Eric Brady (Greg Vaughan) brings Carrie breakfast in bed and finds her and Rafe. Eric goes off on Rafe, asking if he is going through every woman in the family. Eric thinks Carrie is happily married, and she tells him no.

Days of Our Lives Rex Brady (Kyle Lowder) and Sarah Horton (Linsey Godfrey) make plans for the holiday; they want to revive the picnic. Rex goes to take a shower before asking Roman Brady (Josh Taylor) to pull out the grill to cook for the gathering. Rex and Sarah go to the pub looking for Roman.

Days Of Our Lives Spoilers – Claire Brady Has Confessed

Eric tells Rex to call Roman’s cell; Rex goes to get his phone. Eric asks Sarah how married life is. Eric wants Sarah to be happy. Rex has talked to Roman, and he’s on board. Hope Brady (Kristian Alfonso) walks into the pub and Rex invites her to the barbecue. Hope tells everyone about Claire attack on Ciara and her breakdown. Rafe walks in and asks what happened. Hope wonders why he was upstairs.

Days of Our Lives Hope and Ben are at the police station waiting for Eve. Hope informs Eve that Claire confessed to setting all there fires and almost set another last night. Hope tells Eve that Claire took Ciara hostage and almost killed her last night. Eve asks when Claire is now; Hope says in the hospital sedated. Hope doesn’t know if Claire will be ok. Ben tells Eve this is her fault; he told her Claire did this. Eve refuses to drop the charges against Ben. Ben says that went will, Hope tells Ben Eve will have to accept his innocence. Hope apologizes for blaming Ben.

Days of Our Lives Eve calls the hospital to check on Claire. Eve says she should have seen the signs that night. Eve says I failed you Claire, John bursts in and says you are damn right you did. Eve tries to say she just found out about Claire. John and Marlena say they heard her message. Marlena and John vow to put Eve behind bars for using Claire and exploiting her illness.