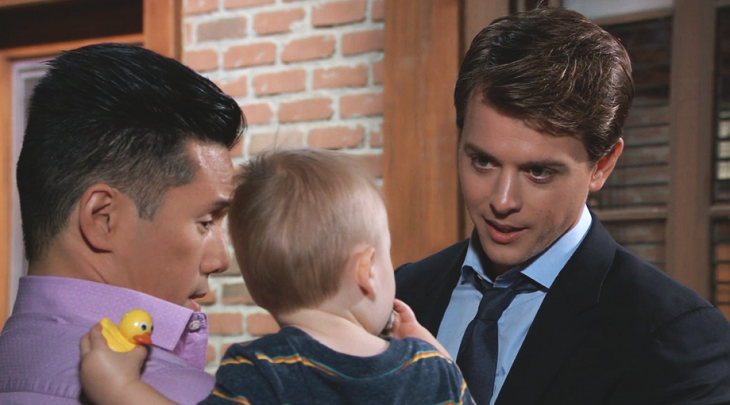 General Hospital spoilers tease that Michael Corinthos (Chad Duell) will have a sweet moment with his godson, Wiley Cooper-Jones (Eric and Theodore Olson) this week. Might Michael be planning to care for and protect his godson by hiding him at the Quartermaine mansion?

A promo released by General Hospital does show him talking to Brad Cooper (Parry Shen) with the child in his arms outside of Charlie’s Pub, where Michael promises his godson he will protect him and keep him safe any way he can. Brad responds that his and Lucas Jones’ (Ryan Carnes) chances of keeping Wiley are becoming more and more easier said than done.

In spite of Brad’s trying to run away with Wiley and obtain fake passports, as shown in the promo, are Michael’s intentions, as Brad mentioned in the promo, to take Wiley to the Quartermaine mansion for a period of time and keep him safe from Shiloh Archer (Coby Ryan McLaughlin) there?

As General Hospital viewers know, hiding Wiley may be the only way to keep him safe until Shiloh can be taken down and arrested. Michael and Jason Morgan (Steve Burton) have been working on getting evidence against Shiloh for the murder of Douglas Miller, Willow Tait’s (Katelyn MacMullen) father.

They have obtained the promise from Carol Lockhart (Mandy Musgrave), a former “Dawnie” from Beecher’s Corners, to make a sworn statement of the fact that she took the fall for Shiloh when he was arrested for the murder. This was in exchange for protection from Shiloh and the corrupt Beecher’s Corners cop, Billy Price (Jonathan Stanley) who Jason thinks is Shiloh’s enforcer.

The information from Carol has been shared with both Willow and Detective Harrison Chase (Josh Swickard) who appears to be bringing acting Police Commissioner Mac Scorpio (John J. York) into the loop also.

Shiloh is very close to confirming that Wiley is his son – as far as he knows. Brad, Nelle Benson (Chloe Lanier) and Liesl Obrecht (Kathleen Gati) know that he is really Jonah Corinthos, although Julian Jerome (William DeVry) knows that there was a swap. Liesl put it together and confronted Nelle about it in jail although she may not be sure who has Jonah.

General Hospital #GH #Jasam Spoilers: Jason And Sam Reconnect But Keep Their Eye On The Prize – Taking Shiloh Down https://t.co/wj1pUcG9Cv

If Michael can get Wiley from Lucas and Brad before Brad cuts and runs with him or Shiloh arranges for his kidnapping, that may be Wiley’s best chance. Although Shiloh would take away his own chance at success in getting custody if he circumvents the law by having him kidnapped!