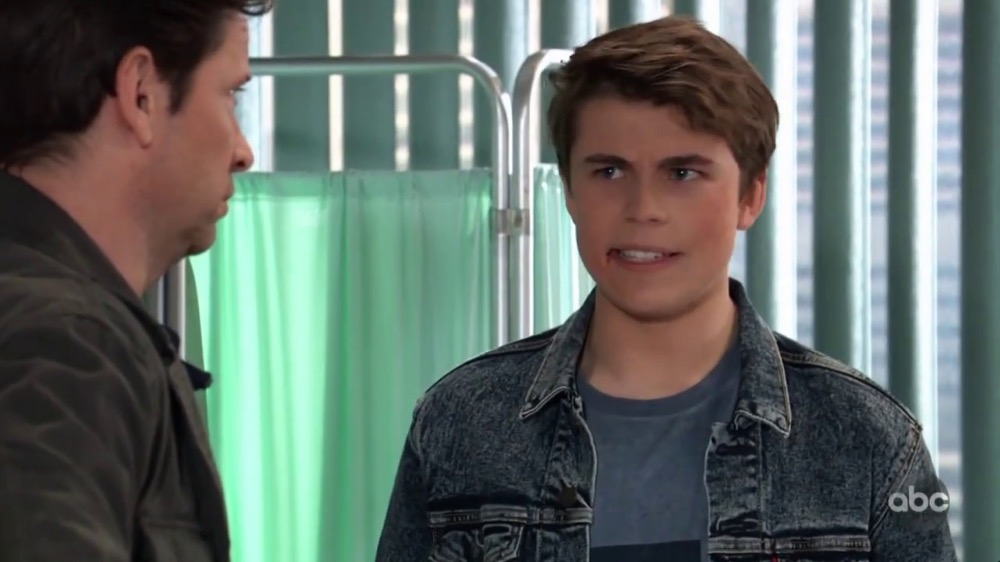 General Hospital spoilers tease that Franco Baldwin (Roger Howarth) will again be worried about his stepson, Cameron Webber (William Lipton) in Wednesday, July 3rd’s episode of General Hospital! Cameron has given his parents much to worry about over the past several months, but the most serious incident is the reason he has to perform community service.

He was caught trying to buy marijuana to make brownies for an ailing Oscar Nero Quartermaine (Garren Lake Stitt) hoping to increase his appetite when he was undergoing a cancer cure trial last summer. Cameron was actually trying to back out of the deal but was in the wrong place at the wrong time, and Detective Valerie Spencer (then played by Brytni Sarpy) caught him with the package trying to give it back to the dealer!

Cameron Webber Asks Dev to Teach Him How To Pickpocket

General Hospital viewers should recall that long before that he had been shoplifting and had influenced Josslyn Jacks (Eden McCoy) to shoplift with him; although neither ever got caught by store personnel or police, both teens were talked to and the merchandise Joss took was returned to the stores she took it from and the incident was swept under the rug.

However, in a recent General Hospital episode, Cameron, while performing his community service in the park, encountered Joss with the Corinthos family’s houseguest, Dev (Ashton Arbab) where Dev had pickpocketed Joss’s phone from out of her pocket without her even noticing! After Joss explained who Dev was, Cam thought Dev’s pickpocketing so secretly was cool and wanted Dev to teach him how to do it!

Will Franco catch Cameron trying out his new “skill” on someone and have to confront him about it before he gets caught by someone in authority? With his being on community service and probation for the pot charge it would really not be good for Cam to be caught pickpocketing and get himself in trouble with the police again; he would be most certainly remanded to a juvenile detention center, in other words, teenager jail!

Or is Franco thinking far enough ahead to realize that Cameron will want to be involved with Joss once she’s ready to move on from Oscar, and worry about Sonny Corinthos’ (Maurice Benard) young cousin “Devin” being competition with Cam for Joss?