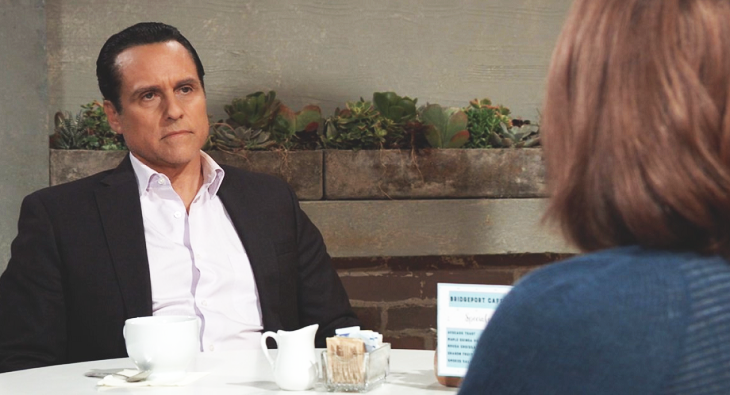 Kristina wants to put her guilt behind her and let it go. Neil reminds Alexis they cannot discuss Kristina’s sessions at all. Alexis wants to talk about the pledge, Neil tries to change the subject. Alexis tells Neil about Oscar Nero’s Garren Stitt) death. Alexis lets it slip that she knows about Neil’s daughter. Neil wants an honest answer, Alexis knows about his daughter.

Neil says he can no longer treat Alexis and asks her to leave. He tells Alexis he has asked her repeatedly to stay out of his personal life and she refused, he can no longer treat her. Alexis tries to explain that Diane Miller (Carolyn Hennesy) give her the information about his daughter. Neil offers to find Alexis another therapist; she refuses. Alexis starts to leave when Kristina shows back up, wanting to have a session with Neil.

General Hospital’s Sonny Corinthos (Maurice Benard) calls Carly Corinthos (Laura Wright) and updates her on Dev’s (Ashton Arbab) situation. Carly tells Sonny to let her know how it goes. Josslyn Jacks (Eden McCoy) asks what Carly is talking about on the phone. Carly tells Josslyn she may not need to know. Josslyn and Dev start to prepare food. Dev asks if Josslyn is still mad at him, she admits she is. Carly sends Dev to the boathouse and Jocelyn wants answers. She explains that Dev helped Sonny and Dante Falconeri (Dominic Zamprogna) escape in Turkey and he wants to repay that. Carly has to meet her mom and promises to return.

General Hospital’s Mike Corbin’s (Max Gail) cousin joins Sonny and asks what he wants. Sonny tells her Mike has Alzheimer’s; she demands to know what Sonny wants. Sonny wants help with a project he is working on, and the cousin doesn’t want to waste his time. Sonny wants to pay her to say Dev is her grandson.He tells his cousin what story he wants her to spin for him; she returns the money and says it’s not big enough.

Sonny tells her to look again; the woman squeezes for more money. He adds more money and tells her she will get the same amount every six months and reminds her what happens to people who double cross him. The cousin agrees to help Sonny, and he promises to send all the information needed to her.

General Hospital’s Franco Baldwin (Roger Howarth) and Liz Baldwin (Rebecca Herbst) tell Cameron Webber (William Lipton) about the reception and invite him to bring a guest. Cameron doesn’t want to come to the reception. Laura Webber (Genie Frances) wants to know that is going on with Cameron. Franco doesn’t know how to take Cameron’s reaction to him. Liz doesn’t know how to fix things between Cameron and Franco. Laura realizes that Cameron’s problem is Franco.

Cameron says Franco knows nothing about him. Laura tells Cameron this is pulling him away from his family. Cameron says no one knows how long Franco will be around. Laura realizes this is about all the father figures Cameron has had in his life. Laura thinks Cameron is putting up walls to protect himself in case Liz’s marriage doesn’t work out. She tells Cameron his brother’s look up to him and how he reacts will affect his brothers. Liz approaches Laura and Cameron. Cameron excuses himself to find a date for the wedding reception. Liz thanks Laura for her help. Cameron goes to Sonny’s and invites Jocelyn to the wedding reception as his date.

General Hospital’s Scott Baldwin proposes to Bobbie Spencer. Bobbie doesn’t want a pity proposal, Scott wants to spend the rest of his life with her. Bobbie tells Scott he has lost his mind and offers him a referral to Shadybrook. Scott says he and Bobbie have been chasing love for years and they should invest in something concrete. Bobbie says this sounds like a business deal. Scott compares Bobbie to an old shoe; she is upset. Scott tells Bobbie she gets his jokes.

Scott says he could picture the two of them spending the rest of their lives together. Bobbie tells Scott he left love out of his proposal. Bobbie loves Scott as a friend and nothing more. Scott apologizes to Bobbie. Bobbie joins Carly and tells her about Scott’s proposal.

Scott runs into Franco and blames him for Bobbie turning him down. Scott tells Franco he made a fool of himself because of his pep talk, Franco tells him to stop living in the past. Carly meanwhile, tells Bobbie she needs to put herself out there and take a chance. Scott asks Bobbie to Franco and Liz’s reception.

General Hospital’s Kristina shows up at the jail to visit Willow Tait (Katelyn MacMullen). Kristina tells Willow that Michael Corinthos (Chad Duell) told her about the charges. Kristina credits Willow for saving her life. Willow explains that she has to protect her child no matter what. Kristina doesn’t mean to pry, Willow thanks her for being there.