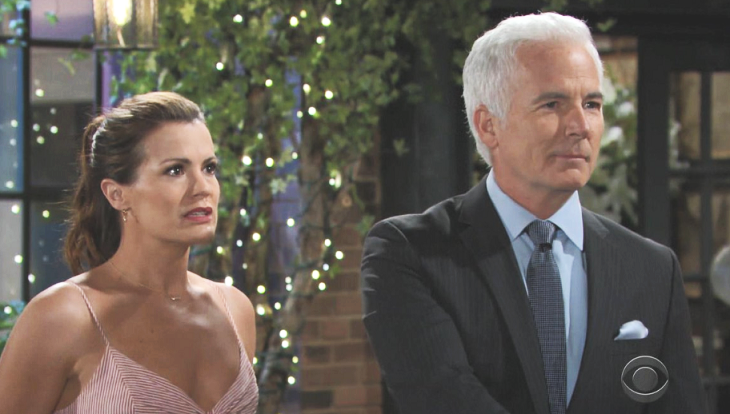 “The Young and the Restless” (YR) recap for Wednesday, July 3, 2019 reveals that over at Newman Enterprises, Victoria Newman (Amelia Heinle) asks Victor Newman (Eric Braeden) why he wanted to see her. Outside, Abby Newman (Melissa Ordway) arrives and tells Nikki Newman (Melody Thomas Scott) she got a message from Dad to meet him. She assumes it’s bad news about his health.

They join Victor and Victoria, and he talks about the experimental protocol Nate Hastings (Sean Dominic) has recommended. Victoria suspects there’s a side effect he’s particularly concerned about, but Nikki denies it. The girls learn Nick Newman (Joshua Morrow) knew before the treatment started. They hug it out after Victor says their supports means more than they know.

At Society, Nick asks Chelsea Newman (Melissa Egan) where she went when she left Genoa City. After a few months she met up with her mom in Louisiana. He fishes to find out when she met Calvin Boudreau (John Burke) and muses it must have been love at first sight. Chelsea dodges the question, but finally admits Anita Lawson (Catherine Bach) dated Calvin, but he ended up with her. Nick mentions her abandoning the life they had. She’s sorry.

Nick wishes she’d trusted him. When he asks what she hoped to accomplish in Genoa City, her husband appears – he’d like to know too. Chelsea makes introductions then tells Calvin she needed to let Adam Newman (Mark Grossman) know where she stands and didn’t want to worry him. When talk turns to Connor, Calvin assures Nick he needn’t worry about him or Chelsea anymore. Nick hugs Chelsea goodbye and she leaves with Calvin but looks back a little anxiously.

At Dark Horse, Y&R’s Phyllis Summers (Michelle Stafford) tells her designer to drop the kitchen counter space and expand the closet of her penthouse in the new high-rise, which should be completed in a month.

At Crimson Lights, Theo (Tyler Johnson) hands Summer Newman (Hunter King) coffee to sober her up. He checks on his influencers and Summer brags about how valuable she is to Jabot – they’ll be worried she’s taken another job. Suddenly she gets a text from Kyle Abbott (Michael Mealor) that Billy Abbott’s (Jason Thompson) pissed – she’d better get to Jabot if she wants to keep her job. Summer rants to Theo about Kyle at length. Theo finally gets her attention back on him, but it’s short-lived. Theo refuses to listen to her obsess over her ex and leaves for Austin.

Young And The Restless Spoilers – Got In Bed With The Devil

Y&R’s Elena Dawson (Brytni Sarpy) arrives at home with items from the market. Devon Hamilton (Bryton James) is glad she’s feeling more at home there and invites her to make changes if she likes. Elena will think about personal touches. He suggests she hang a photo of her mom. Devon wants to take her on a date.

Victoria arrives at Dark Horse and marvels it’s true that Phyllis got into bed with the devil. Phyllis snarks that while Victoria runs Daddy’s empire into the ground, she’ll make Dark Horse the most powerful company in Genoa City. Victoria thinks Phyllis’ inexperience is showing and reveals an acquisition that affects the newest high-rise in town. Phyllis wonders if this move was directed at her or Adam. They spar  until Victoria leaves.

At the carnival, Y&R’s Elena agrees this is a blast from the past. She teases Devon about not eating the fun foods and wanting caviar. Elsewhere, Nikki asks Victor what it’s like getting out of his comfort zone. Victor jokes about it being his ‘jam’ and recaps that it’s nice to find out his children love him. Nikki does too, and asks him to win her a prize. They run into Devon and meet Elena. They joke about Elena having won a huge bear while Devon won a tiny one, and Nikki remarks it’s nice to see Devon happy. As they walk off, Nikki tells Victor she doesn’t know how Devon did it, and Victor talks about finding strength.

Phyllis Summers finds Summer Newman on the coffee house patio. Summer wants to get away from her but stumbles and relays that alcohol relieves pain. Phyllis insists on helping her out – she’ll always be there for her.

In Y&R’s Phyllis’ suite, Summer rants that she doesn’t know what Theo’s problem is and that she only said Kyle Abbott’s name once. She decides to text him that he’s a jerk, but Phyllis stops her. Summer decides she’s independent then admits she’s tired. Phyllis will take care of her and loves her. Summer’s sorry she got mad before. Phyllis holds her. Later, Phyllis tears up watching Summer sleep.

At home, Elena puts the teeny teddy bear Devon Hamilton won her beside a photo of Devon, Neil Winters (Kristoff St. John) and Lily Ashby (Christel Khalil). He thinks it’s perfect and says every time he sees it he’ll remember their second first date. They kiss. And that’s a wrap.