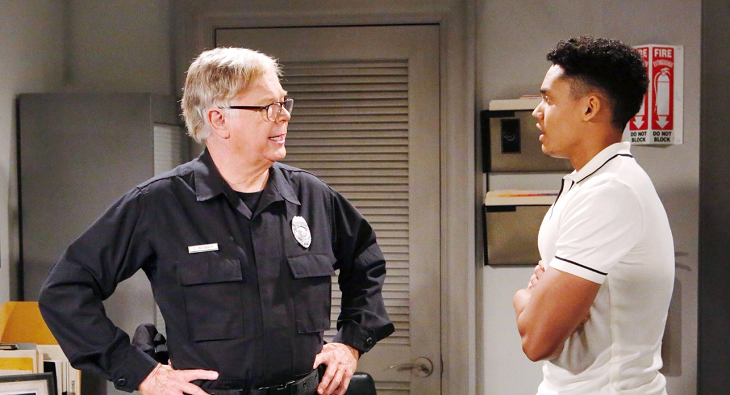 The Bold and the Beautiful spoilers for Friday, July 5, tease that Hope Logan (Annika Noelle) will be completely thrown by Douglas Forrester’s (Henry Joseph Samiri) sweet proposal. As B&B viewers know, Thomas Forrester (Matthew Atkinson) coached his son to propose that Hope marry his daddy and become his new mommy.

Hope was stunned by Douglas’ actions, and when she looked at Thomas, Thomas innocently shrugged to indicate that he didn’t know that Douglas was going to propose. Of course, that was a lie, since Thomas orchestrated the whole scene. He wanted their Fourth of July celebration to be one to remember, and he certainly achieved that!

On Friday’s episode, Hope will have to respond to Douglas’ proposal. According to ongoing B&B spoilers, she will eventually give Thomas an answer to the proposal, but she’ll take her time to think it over first. So, it looks like we won’t see Hope give an answer on Friday’s episode. Rather, she’ll likely tell Douglas (and Thomas) that this is a big decision, and that she needs to think it over.

Bold And The Beautiful Spoilers – Was Chasing Emma Barber

Meanwhile, on Friday’s new episode of B&B, Xander Avant (Adain Bradley) will decide that he needs some assistance to get to the bottom of whatever Thomas is hiding. Xander feels that Thomas is hiding something important about the circumstances surrounding Emma Barber’s (Nia Sioux) death, and as B&B viewers know, he’s absolutely right.

Thomas was at least partially responsible for Emma’s car accident, as he was chasing and tailgating her right before her car ran off the road. But Thomas has falsely maintained that he wasn’t following Emma, and that he was driving on an entirely different route at the time of the accident.

But Xander still suspects Thomas, and so on Friday’s episode, he’ll take action to get to the bottom of what happened to Emma. The Bold and the Beautiful spoilers say that Xander will go to Charlie Webber (Dick Christie) for help. Charlie is a little bumbling at times, but generally does a good job with security at Forrester Creations, and Xander will think that perhaps he can help.

Exactly what Xander will ask Charlie to do remains to be seen, but it just might involve tracking Thomas’ whereabouts the night of Emma’s accident. Whatever the case, hopefully Charlie’s assistance will prove fruitful, but if Xander finds evidence that Thomas was following Emma, will this put him at risk?

What do you think Hope’s answer will be? #BoldandBeautiful pic.twitter.com/xfU2tx3Pei

We all know that Thomas is dangerous, and that he’ll do just about anything to keep the fact that Hope’s daughter is alive a secret…even if it means contributing to someone’s death. Xander’s actions could put him in grave danger!