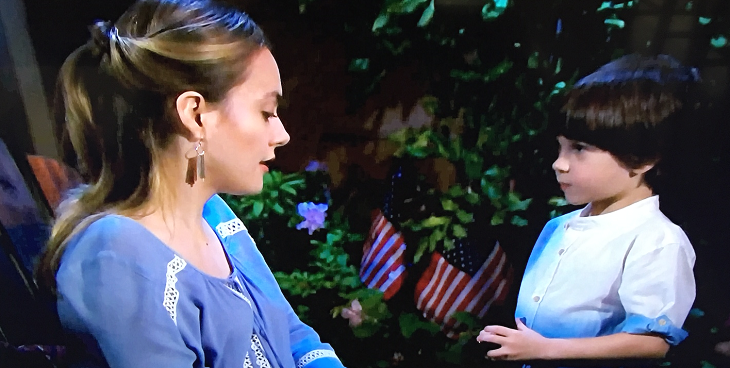 “The Bold and the Beautiful” (BB) recap for Thursday, July 4, 2019 reveals that over at the cliff house, Steffy Forrester (Jacqueline MacInnes Wood) hopes the girls wake up before the fireworks. Liam Spencer (Scott Clifton) looks distracted. Steffy asks where he went.

He was thinking about being at Hope Logan’s (Annika Noelle) the other day – if anyone was going to tell her they made love, it had to be him. Liam worries she’ll be more vulnerable. Steffy asks, “More vulnerable to what? My brother?”

Later, Kelly and Phoebe are dressed in Fourth of July outfits and talk turns back to Thomas Forrester (Matthew Atkinson). Steffy knows he came on too strong with Hope but can’t blame him for wanting her to be part of Douglas Forrester’s (Henry Joseph Samiri) life. Liam grumbles that Thomas wants Hope for himself and won’t let anything stand in his way. Steffy feels Liam’s making him sound obsessed. They agree to disagree about Hope and Thomas.

At B&B’s Brooke Logan Forrester’s (Katherine Kelly Lang) house, Thomas tells Hope that Douglas is looking forward to watching the fireworks with her. He brings up Liam being back with Steffy but Hope wants to focus on the holiday. Thomas credits Hope with helping his son and encourages Hope to let him know she loves him.

Bold And The Beautiful Comings And Goings: Mikey Ryan Makes His Daytime Debut

Brooke and Ridge Forrester (Thorsten Kaye) appear and Thomas heads upstairs. Hope reveals that Liam told her he and Steffy made love; they’re back together. She appreciates him being honest but admits she’s jealous on some level. Upstairs, Douglas asks Thomas if he’ll ever see his mommy again. Thomas is sorry, she’s gone, but she told him if she ever went to heaven, she’d be happy if Douglas was happy.

Thomas points out Douglas is happy with Hope and adds they’ll be a family, but he’ll need his help. He produces an engagement ring and explains he has to ask her to marry him. Thomas coaches Douglas to say, “Hope I want you to be my mommy,” and tells him the ring has special powers to make Hope happy.

Bold And The Beautiful Spoilers – Hope Logan Has A Flashback

Thomas teaches Douglas to propose and swears him to secrecy that it was his idea. Later, Ridge and Brooke stand outside – he knows she’s worried about Hope, but thinks Liam is exactly where she needs him to be…with Steffy. It must make her a little bit happy for the kids. Brooke kisses him but doesn’t respond.

In the cabin, B&B’s Hope Logan Spencer puts out Forth of July snacks and responds to Thomas Forrester’s text that he and Douglas will be down soon. She steps out to watch the fireworks and flashes to telling Liam Spencer she was pregnant last year. Thomas and Douglas join her. Soon, Douglas pulls out the engagement ring and tells Hope he loves her before asking, “Will you be my mommy? Will you marry my daddy?”

Bold and the Beautiful Spoilers: Hope In Danger – Thomas Separates Her From Friends And Family @celebratesoaps https://t.co/xNgvAryXtP

At the cliff house, B&B’s Liam Spencer notices the fireworks starting and remembers Hope Logan Spencer telling him she was pregnant last year. Steffy Forrester Spencer and the girls join him. She acknowledges today must be bittersweet for him. When he concedes it is but being there with the girls helps, especially Phoebe who is about Beth’s age…the love is the same. He tears up, “This little angel is my daughter now.” And that’s a wrap.