Days Of Our Lives Spoilers: Eric Shocked To Find Carrie And Rafe In Bed Together 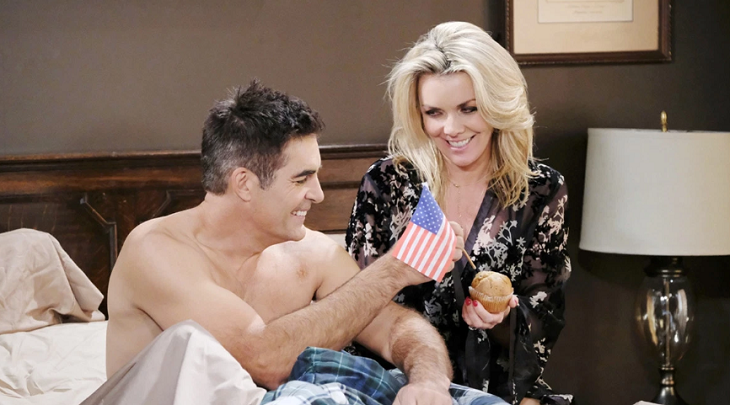 Days of Our Lives spoilers tease that Eric Brady (Greg Vaughan) will make a shocking discovery  and as a result, someone else – actually, a pair of ”someone else’s” – will have an unintentionally rude awakening!

Eric’s older sister, Carrie Brady (Christie Clark), came to Salem for their Grandma Caroline Brady’s (Peggy McKay) memorial remembrance. She is staying in their childhood home, the apartment over Brady’s Pub while in Salem, and Eric has decided to surprise her with breakfast in bed.

This is also where their father Roman Brady (Josh Taylor) lives, so it must be quite a large apartment, seeing as there were four Brady kids growing up there; Roman, Kimberly Brady (Patsy Pease), Bo Brady (Peter Reckell) and Kayla Brady Johnson (Mary Beth Evans).

Days Of Our Lives Spoilers – Walks In Room Without Knocking

Eric, however has quite the embarrassing shock when he apparently walks in with the breakfast without knocking and finds Carrie in bed with Rafe Hernandez (Galen Gering) who obviously spent the night with her!

Rafe and Carrie had reconnected the day before and he had asked for her help with some legal issues concerning baby David Ridgeway (Jaxton and Dexter Ellis). Since Carrie is a lawyer, she agreed to help. Obviously old flames reignited between the two of them, and it had been like they had never been apart, and both are newly divorced and single and available.

So the two have a rather rude awakening, but probably not as bad as if Roman had walked in on them. It’s not like Carrie and Rafe are teenagers trying to sneak in each other’s bedrooms past Mom and Dad, but it’s still her father’s home. Perhaps they should have gone to Rafe’s place instead.

Days Of Our Lives Spoilers – Eric Brady Is Quite Embarrassed

Eric has been a priest, but he’s not a prude. However he is probably quite embarrassed and will likely be very apologetic, leave the breakfast tray and maybe if Rafe is lucky he’ll think to ask him if he wants any breakfast!

Eric probably knows Rafe and Hope Brady (Kristian Alfonso) are divorced but probably doesn’t know that Carrie is divorced because she probably hasn’t told anyone in the family yet; although she will tell Roman everything in Thursday’s episode.

Will Eric be a tattletale and tell Daddy on big sister Carrie and that’s what she confesses to Roman, or will it be about her divorce?