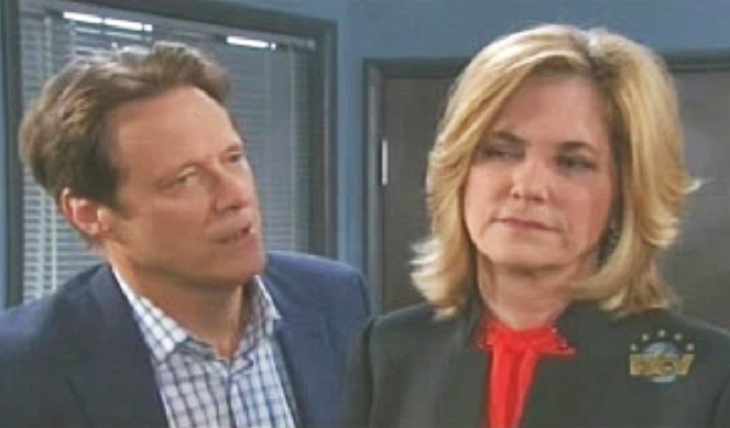 Days of Our Lives (DOOL) recap for Thursday, July 4, 2019, reveals J.J. Deveraux (Casey Moss) comes out of the shower to someone banging on his door. J.J. opens the door to Jennifer Horton (Melissa Reeves) inviting him to the party.

Haley Chen (Thia Megia) comes out of the shower, urging J.J. to come back to the bathroom and is stunned to see Jennifer there. J.J. tells Jennifer that Jack Deveraux (Matthew Ashford) dropped the charges against him. J.J. doesn’t believe Jack has a heart; he is after something. Jennifer tells J.J. that she told Jack about the diary, but he isn’t interested.

Days of Our Lives Lani Price (Sal Stowers) arrives to speak to Doug Williams (Bill Hayes) and Julie Williams (Susan Seaforth Hayes). Doug has invited Lani to the party. Julie wants to speak to Lani and goes on about Lani and Eli Grant’s (Lamon Archey) break-up. Eli walks in and asks if Lani has shared the good news. Sarah Horton (Linsey Godfrey) calls and tells Julie about the picnic and asks her to invite Jennifer as well.

Days of Our Lives Roman Brady (Josh Taylor) comes into Carrie Brady’s (Christie Clark) room, and she explains about why he saw Rafe Hernandez (Galen Gering) leaving her room. Carrie tells Roman that Rafe spent the night with her. Carrie talks to Sarah and tells her she slept with Rafe last night. Hope walks in as Carrie is asking Sarah to follow Eric Brady’s (Greg Vaughan) lead on keeping quiet about the one night stand. Hope tells Sarah and Carrie that Shawn and Belle needed time alone with Claire.

Days Of Our Lives Spoilers: Eve And Jack Shocked To See Haley With JJ At Brady-Horton Barbecue

Carrie and Rafe look guiltily at each other across the room. Carrie tells Rafe that Hope walked in the conversation about the one night stand, but she doesn’t know if she overheard. Rex and Sarah stand outside the pub and watch the fireworks; Eric watches out the window. Carrie has to leave and heads to the airport after hugging Roman and Eric goodbye. Carrie thanks Eric for keeping her secret.

Rafe speaks to Hope who looks in on the baby. Rafe talks about pulling Ciara from the cabin; Claire never crossed his mind. Rafe apologizes to Hope and tells her he’s there if she needs anything. Hope asks if it’s the way he was there for Carrie last night, she tells him not to worry about it. Hope takes off her rings and says it doesn’t matter anymore. Hope gives Rafe his rings and goes to check on Doug and Julie.

Days of Our Lives Rafe comes downstairs at the pub and walks into Hope Brady’s conversation about Ciara Brady’s (Victoria Konefal) attack. Hope wants to know why Rafe was upstairs. Eric Brady (Greg Vaughan) lies and says Rafe was checking out a water leak for him. Rafe is shocked to find out that Claire Brady (Olivia Rose Keegan) is the one who started the fires.

Rafe plans to go to the picnic. Julie thinks Rafe needs to stay away. Rafe later runs into Doug and Julie. Julie doesn’t want Rafe at the picnic. Rafe tells Doug and Julie what happened with Claire and Ciara. Julie has a change of heart and asks Rafe to come with them. Eli questions how tough this is going to be on Claire to get past. Rex wants Sarah to pick between her and Eric’s hamburgers, and she chooses Eric’s.

Rex makes an Independence Day speech and toasts the family past and present. Eli takes Lani off to herself, and they talk about their baby. Both Eli and Lani want another chance at parenthood one day. Eli wants to have a wife that he loves first who makes him laugh. Lani believes that sounds like a nice step; she wants a husband that does the same. Eli tells Lani he has a question for her. Eli gets down on one knee and proposes, Lani accepts.

Eve starts ranting, making it all about Ben, and Jack tries to comfort her. Eve wants to go home and order room service .Jack tells her they can’t, he has mayoral duties to attend to and needs her with him. Jack and Eve run into Jennifer, J.J., and Haley and Jack rants about Haley being a fugitive. Jennifer brings up the diary, and Jack claims to want to keep his options open.

In the latest #DAYS, Eve confronts Jack when she realizes he's been hiding something from her.https://t.co/ZsCmioRrzb pic.twitter.com/3SLENGAkid

J.J. wants Jack to forget them altogether. Jack and Eve work the crowd at the square before the fireworks display. J.J. and Haley discuss Claire. Jennifer talks about watching fireworks in London with Jack. J.J. says she deserves better. Jack watches Jennifer longingly until Eve pulls him into a kiss.