EastEnders Spoilers: Stacey And Kat At War As Their Feud Escalates 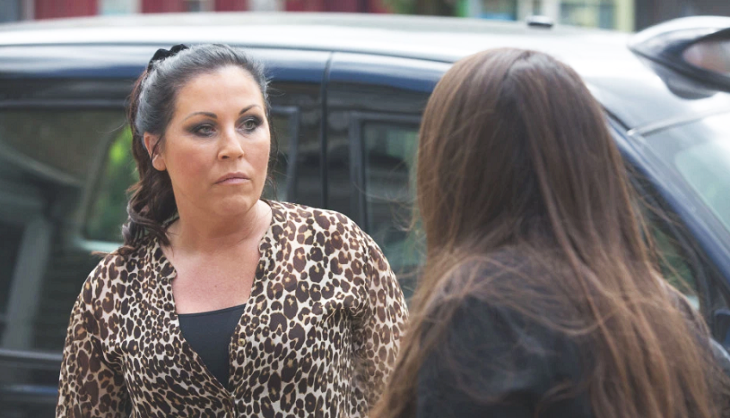 Tensions are heating up on “EastEnders” as the feud between Stacey Fowler (Lacey Turner) and Kat Slater (Jessie Wallace) come to a head next week. The two have been at odds ever since Stacey found out that Kat knew about Kush Kazemi’s (Davood Ghadami) plan to file a custody claim for Arthur Fowler (Hunter Bell).

When Kush and Stacey’s husband Martin Fowler (James Bye) agree to bury the hatchet, Kat tries to make amends with Stacey. However, the two women will continue to fight, which causes Stacey to make a drastic decision about Kat. What could this drastic decision be?

The week starts with Kush and Martin still at loggerheads. Shirley Carter (Linda Henry) suggests the two men settle their differences once and for all a boxing ring. So, the villagers work together to create a makeshift ring as Kush and Martin prepare for their match.

Then, Kush sees some boys trying to steal Martin’s money belt. He chases them with Martin in tow. The two men manage to get back the belt back and eventually decide to make peace.

As they patch things up, Kat tries to reach out to Stacey. But when Kat asks for her money back, what started as an attempt to reconcile will end up in a huge argument that will cause Stacey to make a drastic decision about Kat.

Things are made worse when Kat realizes that the money Alfie Moon (Shane Richie) scammed from Phil Mitchell (Steve McFadden) is missing. She already promised Kush that she’ll help pay the legal fees for his custody battle against Martin. With the money gone, she won’t be able to cover the legal fees.

EastEnders Spoilers – Thief Could Be Any One Of Them

Since most of the Slaters know about the money, the thief could be any one of them. Kat immediately points her fingers towards Mo Harris (Laila Morse) and Stacey. She confronts them but neither admitted to taking her money.

She then wonders if Martin took the cash after overhearing a tense conversation between him and Kush in the market. Kat rounds them all up, believing that Martin took the money.

Stacey immediately defends her husband and begins to lose her cool when she finds out that Kat plans to use the money to help Kush.