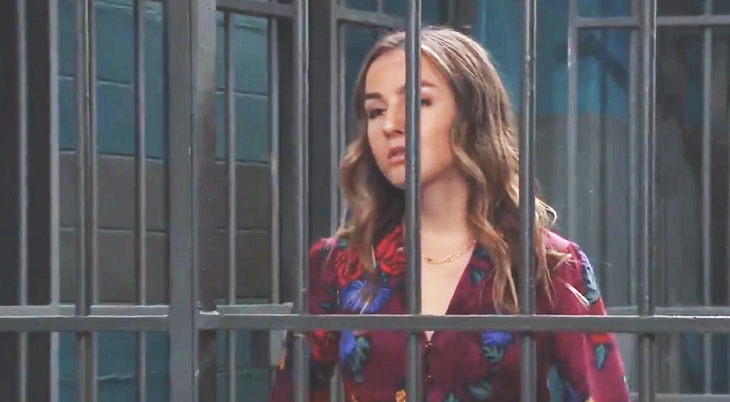 Willow was instrumental in Kristina’s exit therapy and really got through to her about the dangers of Dawn of Day and Shiloh Archer (Coby Ryan McLaughlin) and Kristina will probably was disturbed to hear what Willow is going through trying to protect Wiley Cooper-Davis (Eric and Theodore) from Shiloh.  Kristina feels Willow is her hero.

As General Hospital viewers know, Willow brought herself under contempt of court for lashing out at Shiloh in family court and refusing to cooperate with divulging her baby’s whereabouts and Judge David Walters (William Allen Young) put her in jail.

Her boyfriend, Detective Harrison Chase (Josh Swickard) escorted her and got her settled in the cell, and tried to get Police Commissioner Mac Scorpio (John J. York) to see if he could intervene with the judge so Willow could get out of jail.

Unfortunately, as Mac told Chase and reminded General Hospital viewers, this was the same judge that denied visitation of Mac’s own granddaughter, Georgie Spinelli (Lily Fisher) to Maxie Jones (Kirsten Storms) for over a year.

The judge also appears to have a decided bias towards the birth father and away from the birth mother. But on the other hand, Damian Spinelli (Bradford Anderson) is a far cry from Shiloh!

Kristina is disturbed, and angry and wants to help if she could.  She offers Willow her full support to do whatever she needs.  Sadly, there will not likely be anything she can do other than be part of little Wiley’s army of protection and offer Willow her support.

Willow is probably wondering how this stay in jail will affect her job that she just recently got back. It’s not clear just exactly how Kristina will hear about Willow’s predicament.

But since her mother, her father, her sister and her brother are all involved in either the custody case or the case against Shiloh or both, bad news travels fast. So she could hear it from almost any of them, or even from her friend Detective Valerie Spencer (Paulina Bugembe).