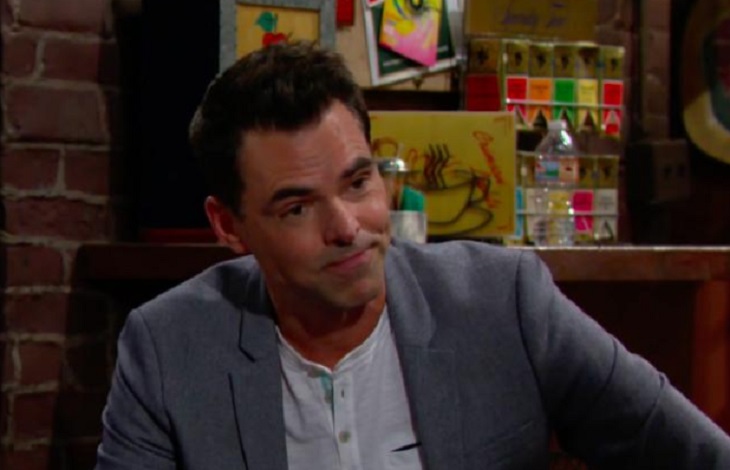 “The Young and the Restless” spoilers for Friday, July 5, tease that Calvin Boudreau’s (John Burke) stance will stun Chelsea Newman (Melissa Claire Egan). In their suite at the athletic club, Calvin mentions his recent meeting with Adam Newman (Mark Grossman) and how Connor Newman’s (Gunner and Ryder Gadbois) father should have custody. Naturally, Chelsea is floored and appalled.

Chelsea insists she’s not giving up her son and wonders if Adam threatened him. Calvin shuts down that idea. He suggests they could have their own child, but Chelsea remains against giving up Connor. At Adam’s penthouse, he finds Phyllis drinking by herself. Adam asks about the bash earlier and grabs some Champagne so they can toast to being outcasts.

After Adam brings up Nick Newman (Joshua Morrow) and Summer Newman (Hunter King) being no-shows, Phyllis notes that Nick holds her responsible for Chelsea leaving town. She opts not to go into the whole story and heads for Dark Horse. That leaves Adam to read a text from Kevin Fisher (Greg Rikaart), who’s spotted Chelsea with an old guy. Adam lets Kevin know he should keep spying.

Young And The Restless Spoilers – Summer Rants To Nick

At Nick’s place, he’s joined by Summer for Chinese takeout. She gripes about Phyllis and reflects on the situation with Theo Vanderway (Tyler Johnson) before talk turns to Chelsea. Nick ends up opening a fortune cookie that talks about an old love reentering his life, which Summer finds chillingly accurate.

Later, Nick receives a panicked phone call from Chelsea. She exclaims that her husband is dead, so Nick heads right over. Back with Adam, he gets updates on EMTs being summoned to the GCAC. Adam finds Nick embracing Chelsea as Phyllis waltzes in. She declares it a “tough break” for Adam.

At Devon Hamilton’s (Bryton James) penthouse, Ana Hamilton (Loren Lott) plays Tessa Porter’s (Cait Fairbanks) new video for her brother as well as Elena Dawson (Brytni Sarpy). Elena thinks it’s fantastic, but Devon still isn’t sold on this being a good plan. He approves of the energy behind the project, but he isn’t fond of the shoddy audio.

Ana contends that they wanted an authentic sound, but Devon counters that the quality didn’t have to suffer because of it. He still thinks Ana’s too green and could use some help. At Society, Theo arrives for his meeting with Devon and exchanges introductions with Elena. Devon hopes Theo can use his skills to advise Ana.

Once Ana’s brought up to speed, she isn’t happy at all. Ana thinks Theo’s just a tweeting professional party boy, but Theo convinces her that he wants to help her succeed. She decides she’s OK with Theo serving as a mentor. After Summer notices a pic of Theo posted online, she tracks him down at Society. When she walks in, Summer’s taken aback to see Theo toasting with Ana.

At Newman Enterprises, Victoria Newman (Amelia Heinle) greets Billy Abbott (Jason Thompson) as he enters. She’s sorry for not meeting up with him as planned, but she quickly shifts gears. Billy checks out Victoria’s laptop screen and learns a Dark Horse building is empty because of her. Newman landed the tenant instead, so Billy gives Victoria a kiss and decides they’ll celebrate at the carnival.

Young And The Restless Spoilers – Billy Headed Down Dark Path

While Billy plays the shooting game, he recalls getting the gun out at the Abbott house. Billy flashes to his anger over Adam at the cemetery as well. “The Young and the Restless” spoilers say Billy could be headed down a dark path! We’ll keep you posted as other Y&R news and rumors emerge. Stay tuned to see what’s next in Genoa City.