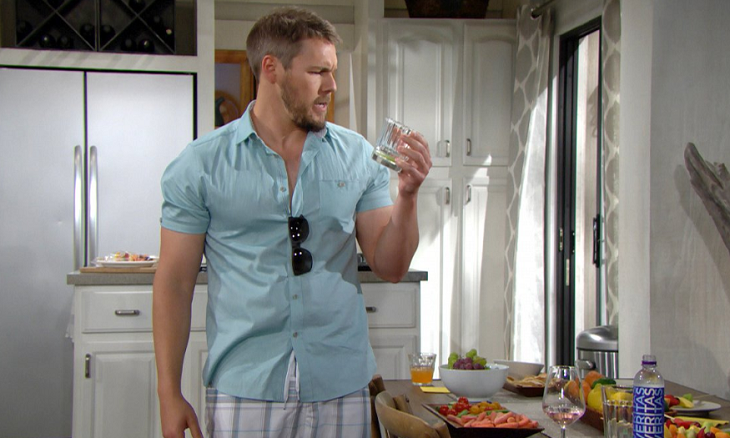 The Bold and the Beautiful star Scott Clifton spoke to Soap Opera Digest about when his character Liam Spencer was drugged by Thomas Forrester (Matthew Atkinson). And, when B&B fans read his comments, they reacted by flocking to his Twitter account to let him know how they feel about the drugging storyline.

In the SOD article, Clifton told the magazine that the sex between Liam and Steffy Forrester (Jacqueline MacInnes Wood) was consensual and they really do love each other. He made sure that he drove the point that there was no rape there, he was in control of his actions. All the drugs did was relax him and he lost his inhibitions.

The next morning, he wakes up and it takes him a minute to piece together what happened the night before. After a few minutes, he realizes they made love and it was a good night. However, he immediately feels guilty and he feels the need to confess to Hope Logan (Annika Noelle).

Yes, and let no one think I am minimizing what Thomas did (or will do) here. It’s inexcusable.

What I’m pushing back against is the reckless comparisons to actual victims of date rape.

Bold And The Beautiful Spoilers – Lope Upset About Events

He confesses to Hope, and they are both very upset about what happened. However, Liam cannot deny that he is in love with Steffy. This little detail hurts Hope as she realizes it is really over between them. It might cause her to turn to Thomas for comfort.

After reading Clifton’s comments, B&B fans flocked to his Twitter account to let him know how they felt about this storyline. Many said Thomas spiked Liam’s drink with a date rape drug. Clifton shot down that idea right away. He said that it wasn’t anything like that. For all he knew, it could have been an antidepressant. He doesn’t understand why it had to be a date rape drug.

One of the people commenting was a rape victim. She claimed the B&B storyline was hard to watch because it reminded her of what had happened in her life. However, Clifton said that this is not a rape storyline.

Bold And The Beautiful Spoilers – Liam Spencer Did Consent

He didn’t think that Liam was raped just because he was on some unknown drug. He said that on Bold and the Beautiful, Liam consented to sex with Steffy. He loves her and he reacted to that.

Even so, some B&B fans didn’t agree and they felt his comments were very disrespectful to rape victims. They expressed his comments discounted their experiences.

Bold And The Beautiful Spoilers: Steffy Calls Out Thomas For Meddling In Lope’s Relationship

Clifton maintains he didn’t mean to offend anyone – he was merely explaining Liam’s situation and defended the fact he was not a victim of rape.