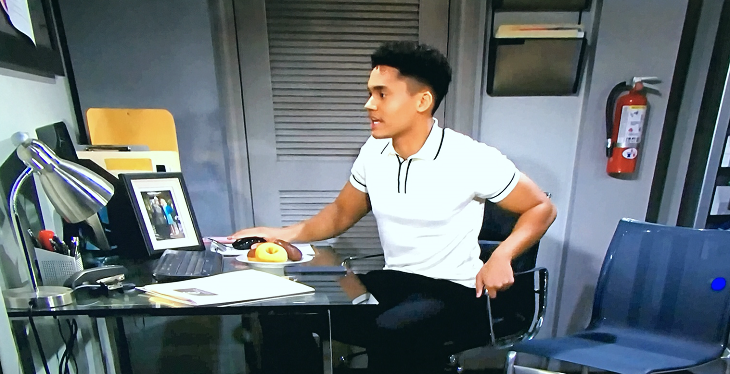 The Bold and the Beautiful spoilers for Monday, July 8, tease that Hope Logan (Annika Noelle) will be stunned. She not only got a proxy marriage proposal from Douglas Forrester (Henry Joseph Samiri) during which he asked her to marry his daddy, but now she’s just gotten a proposal from Thomas Forrester (Matthew Atkinson) himself.

As B&B viewers know, Thomas laid it on pretty thick during his proposal. He did his best to persuade Hope to become his wife. He promised to love and care for her, and to give her a shot at motherhood. This was pretty manipulative on Thomas’ part, since he knows that Hope has vowed to never try again to have a child of her own.

On Monday’s episode of B&B, Thomas will continue his pitch to Hope and wait for an answer. He may remind Hope again that Liam Spencer (Scott Clifton) didn’t waste any time moving on with Steffy Forrester (Jacqueline MacInnes Wood), which of course Liam did after being drugged by Thomas. All of Thomas’ schemes and lies have led to this big moment, and now it’s time for Hope to come to a decision.

What do you think Hope’s answer will be? #BoldandBeautiful pic.twitter.com/xfU2tx3Pei

Bold And The Beautiful Spoilers – Suspicions Are Confirmed

But while all of this is going on in the cabin, some big drama will be going on in the main house. Brooke Forrester (Katherine Kelly Lang) and Liam have just found out from Douglas that Thomas manipulated his son into giving Hope the engagement ring and proposing for his father. Brooke and Liam are peeved with Thomas, and this just confirms their suspicions about him.

Liam will want to run right to the cabin and put a stop to Thomas’ proposal, but he’ll face an opposing force on that front. It seems that Ridge Forrester (Thorsten Kaye) will have something to say about that. According to B&B spoilers, Ridge will directly interfere with Liam’s plan to interrupt Thomas’ proposal.

Ridge will appear on the scene as Liam’s preparing to go to the cabin, and he’ll put a stop to Brooke and Liam interfering in Hope’s life. As B&B viewers know, Ridge is quick to defend his son and he thinks that Thomas and Hope would be a good couple. He’ll probably argue that Brooke and Liam need to let Hope make her own decisions and live her own life.

Bold And The Beautiful Spoilers: Steffy Calls Out Thomas For Meddling In Lope’s Relationship

Xander considers this to be solid evidence that Thomas murdered Emma, but he’s going to need more proof that what he’s got. So, according to B&B spoilers, he’ll increase his efforts to find evidence against Thomas. But where will his search lead him next?