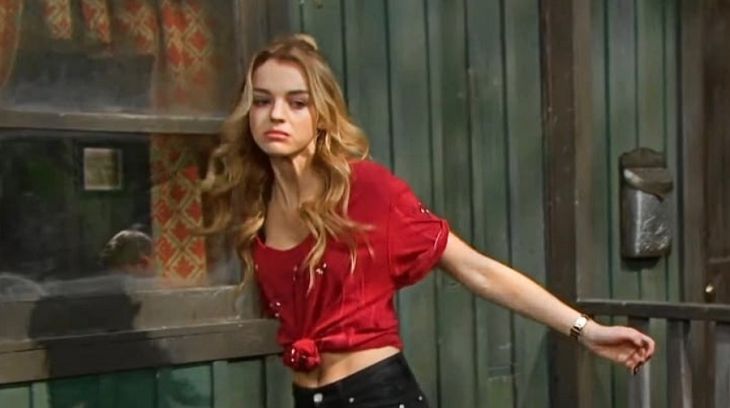 Olivia Rose Keegan will soon say goodbye to Salem as the story of her character, Claire Brady, comes to an end. On July 9, viewers of the show will see the character for the last time when she is sent off to a mental hospital. Keegan admitted that she struggled to bid farewell, not only to her alter ego but also to the people she has worked with and has gotten close to over the years.

Keegan landed the role in “Days of Our Lives” back in 2015 when she was just 15 years old.

“I grew up with the people there,” she told Soap Opera Digest. “They’re my family.” She’s created a lot of great memories since she joined the show. She’s also grateful for everything that working in the soap has taught her.

Days Of Our Lives Spoilers – Shared Scenes With Best Friend

“I got to play a thousand characters in one. I am so grateful for my last storyline and the last six months on the show.” Although her exit story was the most difficult material she worked with, it was also the most enjoyable time for her. Plus, she had the chance to share some scenes with her real life best friend who plays the role of Ciara Brady, Victoria Konefal.

When it was first revealed that Claire was leaving Salem, fans weren’t too upset about it. The character’s evolution into a pyromaniac and attempted murderer didn’t sit well with many viewers.

But Keegan did play her alter ego so well that many of the show’s viewers were entertained, while they watched her go on her downward spiral. Now, many of them are hoping to see a different ending for the character. Claire may get her life back on track but that will happen off-screen.

If there are things she’ll surely miss when she leaves, among them are the conversations and the people on the set. She explained that working in “Days of Our Lives” didn’t seem like a job because it didn’t feel like one. She also shared that many of the cast and crew made her last day on the set very special.

After the impromptu glitter celebration they shared in her dressing room, she went out to dinner with Konefal, Thia Megia (Haley Chen), Matt Ashford (Jack Deveraux) and her hair stylist Marisa.

Days Of Our Lives Spoilers: Are Belle And Shawn Responsible For Claire’s Mental State? https://t.co/f5P88UubJE pic.twitter.com/xys1keOtw8

When asked about a possible return, she said she’d love to come back to the show one day. For the meantime, she’s having a blast working on her music and auditioning for new roles.