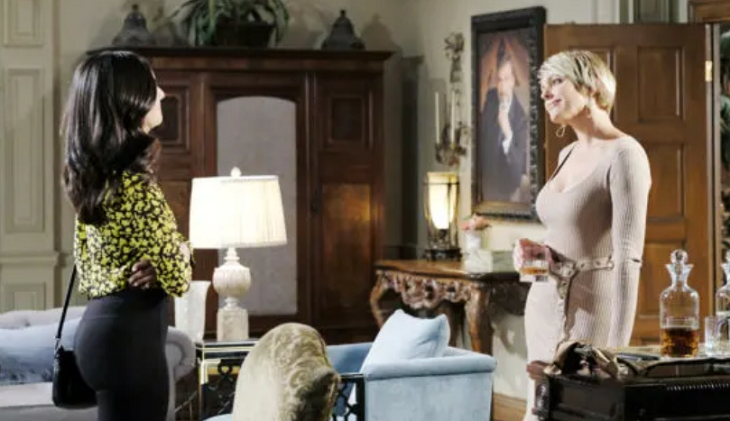 Days of Our Lives (DOOL) recap for Friday, July 5, 2019, reveals Sarah Horton Brady (Linsey Godfrey) teases Rex Brady (Kyle Lowder) about the necklace Xander Cook (Paul Telfer) gave her. Rex doesn’t want Sarah to wear the necklace at all. He takes the necklace to return it to Xander. Rex wants to choke Xander with the necklace.

Rex runs into Chloe Lane (Nadia Bjorlin) and shows it to her. Rex wants to give the necklace to Chloe; she thinks he should clear that with Sarah first. He insists the necklace will look great on Chloe and asks her to try it on, Brady Black (Eric Martsolf) question the interaction. Brady tells Rex that Xander sent Kate away on a business trip. Rex gets a text from Kate and comments to Brady that it doesn’t sound like her. Brady and Rex discuss Kate’s texts, and Brady believes it has something to do with Xander.

Days of Our Lives Kristen Dimera (Stacy Haiduk) calls and questions Xander about Ted Laurent (Gilles Marini) and Kate Roberts (Lauren Koslow). Xander assures Kristen that both are dead, Kristen can now concentrate on DiMera Enterprises. Chloe shows up at Nicole Walker’s (Arianne Zucker) room with cookies. Nicole goes on about Chloe being the reason her daughter is dead and walks off.

Days Of Our Lives Spoilers – Kristen DiMera Has A Slip Up

Days of Our Lives Gabi Hernandez (Camila Banus) and Stefan DiMera (Brandon Barash) are getting ready to head to work. Stefan goes to get paperwork, Gabi talks about getting everything she wants. Nicole overhears Gabi and inquires about what she does want. Nicole and Gabi clash over working together. Stefan breaks up their argument and tells them they have to show a united front. Gabi gives Stefan her idea of a launch party. Stefan agrees with Gabi’s ideas.

Days Of Our Lives Spoilers: Passion Erupts Between Kate And Ted In The Secret Room

Nicole argues that they should be separate. She slips up and says this isn’t what father would have wanted. Stefan questions her choice of words. Nicole says she has more experience and Stefan should listen to her. Nicole suggests a type of champagne to have at the launch, Stefan sends her to get it. Nicole is furious that Stefan expects her to get the champagne and bring it to him instead of getting a servant to do it.

Days of Our Lives Kate and Ted are hot and hungry in the tunnels; Ted believes they will die if Xander doesn’t bring food and water soon. Ted keeps yelling for help; Kate tells him no one can hear them. Kate tells Ted he needs a show. Ted uses champagne to take a shower. Ted tells Kate she still wants him and tells her to take off her clothes. Kate takes off her jacket but wants nothing to do with a champagne shower. Kate tells Ted she was the best thing to ever happen to him. Ted and Kate banter back and forth before he pulls her into a kiss. Nicole walks in and finds Ted and Kate together.

Days of Our Lives Eric Brady (Greg Vaughan) and Hope Brady (Kristian Alfonso) are in the chapel. Hope thinks Eric for trying to spare her feelings yesterday. Eric and Hope talk about her relationship with Ted. Hope tells Eric about the necklace and how Sarah has it. Hope heads off to talk to Xander.

Sarah comes in to say a prayer for Ciara Brady (Victoria Konefal) and Claire Brady (Olivia Rose Keegan). Sarah asks Eric if he has thought about talking to Nicole again. Eric says Nicole made it clear she wants nothing to do with him. Eric breaks down, saying he has done everything he could to get through to Nicole and he has to let go. Sarah is sorry for what Eric is going through, and she wants to be there to help him.

Days of Our Lives Spoilers: Tensions Mounting Between Jack And Eve – Awkward Convo With Haley And JJ Seals The Deal https://t.co/wc9DF28HTT pic.twitter.com/ee6xADPzxJ

Days of Our Lives Brady Black (Eric Martsolf) confronts Xander about Kate’s disappearance. Xander tells Brady he sent Kate to a seminar. Brady tells Xander everything has to be run by him. Hope comes in and questions Xander about the necklace. Xander claims to have bought the necklace, how knows he is lying. Xander lies and tells Hope he found Ted at a pawn shop and bought the necklace there. Hope asks Xander is Ted said where he was going, Xander replies no. Hope wants to know if Nicole’s name came up since Ted said he had a message for her.