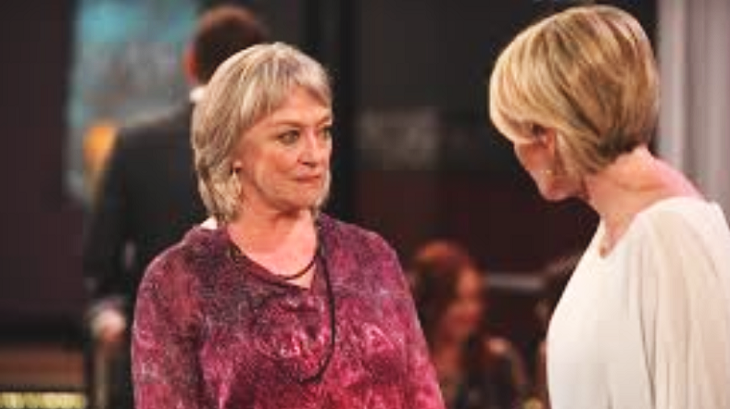 General Hospital spoilers tease that Ava Jerome (Maura West) is still so overwhelmed by her grief for Kiki Jerome (Hayley Erin) that she will hold a séance to try and contact Kiki. This is after hearing about Josslyn Jacks’ (Eden McCoy) séance to try to contact Oscar Nero Quartermaine (Garren Lake Stitt).

Ava asked Joss a lot of questions about the séance on a recent episode. She also responded to a reservation that Kiki had set up with a local restaurant for the two to meet and apparently programmed to send in the future or it came from the restaurant itself, since no one had cancelled it.

General Hospital fans are buzzing about the photo still released by General Hospital about a month ago, showing Veronica Cartwright, in a still unannounced role, standing with Ava in a restaurant.

It wouldn’t seem that Cartwright playing a psychic in Ava’s séance would demand such secrecy, although it’s possible. But it does seem that this scene may be connected to Ava’s going to the restaurant to meet Kiki or her ghost and possibly holding the séance there in the restaurant.

In December 2018, Hayley Erin did state in an interview with Soaps.com, shortly after leaving General Hospital to start appearing in “Pretty Little Liars: The Perfectionists” that she would be willing to appear as Ghost Kiki from time to time, if General Hospital powers-that-be asked her to.

Nothing has been released recently on this possibility, but many times actors cannot confirm anything until closer to the air-date. However, there was a more recent interview with ABC Soaps In Depth, in May 2019, where she talked about her new show and ending her role as Kiki.

She also implied that her filming for the new show had ended, so she may have some free time to reprise Kiki as a ghost.

On the other hand, if the photo still of Cartwright and Ava in the restaurant is connected to Ava having a séance to contact Kiki, it’s always possible that the séance will attract the wrong ghost and Veronica may be the ghost or another GH character thought long dead, as other General Hospital spoilers have teased!