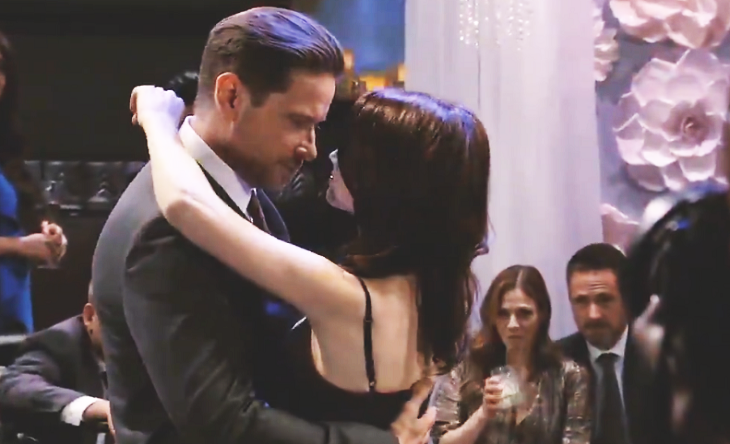 “General Hospital” spoilers for Monday, July 8, tease that Franco Baldwin (Roger Howarth) and Elizabeth Baldwin’s (Rebecca Herbst) wedding reception will kick off. The happy couple will finally have a chance to celebrate with all their friends and family members. This is sure to be a special night for “Friz,” but it’ll also be a wild one!

Of course, the only way that’ll happen is if Nina finds out Sasha Gilmore (Sofia Mattsson) is a phony. Liesl knows the secret, so she’ll end up making trouble for herself when she blabs to Franco. It doesn’t look like Liesl will come right out and say that Sasha is Nina’s fake daughter, but her hint could be crucial later.

Liesl is also in the loop on GH’s baby swap, so it’s possible she’ll make matters worse with that, too. Regardless, Brad Cooper (Parry Shen) will be in panic mode over Shiloh Archer’s (Coby Ryan McLaughlin) threat. He’ll tell Julian Jerome (William deVry) that Shiloh thinks he’s “Wiley Cooper-Jones’” father, which is terrible news since it puts them a step closer to a DNA test.

A DNA test would prove Shiloh isn’t the “baby daddy” and stir up plenty of questions. Julian will assure Brad that they can handle this, but he may not be as certain deep down. He’ll also interact with Bobbie Spencer (Jacklyn Zeman) at this gathering. Bobbie will make it clear that Julian’s help never goes anyone any good. She’ll think Julian would be better off leaving Brad and Lucas Jones (Ryan Carnes) alone entirely.

Other “General Hospital” spoilers say Curtis Ashford (Donnell Turner) will come through for Valentin. During a phone call, Curtis will admit Jasper “Jax” Jacks (Ingo Rademacher) had a file on Valentin along with one on Cassandra Pierce (Jessica Tuck). He’ll be instructed to keep up the good work, but Valentin may worry about this shocking discovery.

As for Kim Nero (Tamara Braun), she’ll look forward to the celebration. It appears Kim will put he grief aside long enough to have some fun at the reception. A little break from her mourning might help her heal. Some major shockers are coming up by the end of the night, including Liesl’s splash into the harbor and Hayden Barnes’ (Rebecca Budig) return.

“General Hospital” spoilers say Ava Jerome (Maura West) will also meet with a psychic. Veronica Cartwright will play this eerie medium who comes on the scene to help contact Kiki Jerome (Hayley Erin). The psychic will have some strange messages for Ava and the other partygoers, so this storyline should take an intriguing turn.