Bold And The Beautiful Spoilers: Xander Looks To Prove Thomas’ Involvement In Emma’s Murder – Will His Life Be In Danger? 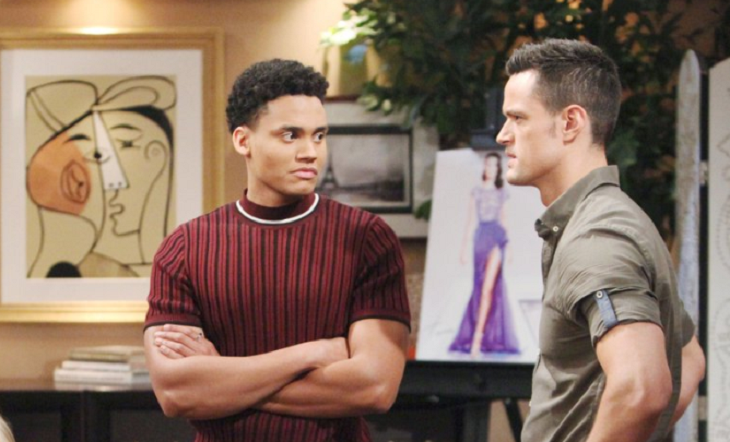 The Bold and the Beautiful spoilers tease that Xander Avant (Adain Bradley) won’t be content to let Emma Barber’s (Nia Sioux) death go unavenged. Xander has been suspicious about the circumstances surrounding Emma’s car accident from the get-go, and he strongly believes Thomas Forrester (Matthew Atkinson) was directly responsible for the accident.

Xander just doesn’t buy Thomas’ story that he took back roads to get to Hope Logan’s (Annika Noelle) cabin the night of Emma’s car accident. Rather, Xander believes that Thomas likely followed Emma and did something to cause her to run off the road and over the embankment where she died. As B&B viewers know, Xander is spot on with his suspicions.

The Bold and the Beautiful spoilers say that Xander will soon start looking into the matter on his own. After all, he had real feelings for Emma at one time, and he’ll feel like he owes it to her to make Thomas pay if Thomas did indeed cause her death. So Xander will do some sleuthing on his own, but he’ll need a little help.

Xander is not going to let this go. RT if you’re rooting for him! #BoldandBeautiful pic.twitter.com/INtmbYy1qD

According to B&B spoilers, Xander will call on the help of Charlie Webber (Dick Christie), Forrester Creation’s head of security. Charlie tends to be a little bumbling at times, but he usually gets the job done, so he’ll be a good partner for Xander. He’ll ask Charlie for a big favor, and it will likely have everything to do with tracking Thomas’ movements on the night of Emma’s car wreck.

Of course, Xander probably won’t tell Charlie exactly what he’s looking for, as he won’t want to spill the secret about Beth Spencer aka Phoebe Forrester (River Davidson and Madeline Valdez) being alive. Charlie will be curious, and it will be interesting to see whether he mentions any of Xander’s sleuthing to Pam Douglas (Alley Mills).

But chances are, Xander will swear Charlie to secrecy. The two men will work together, and B&B spoilers say that eventually Xander will find the proof that he’s seeking, but what will it be?

Bold And The Beautiful Spoilers – Link To Emma Barber’s Death?

B&B viewers will have to wait to see exactly what Xander finds, but whatever it is will surely link Thomas to Emma’s death somehow.

And that begs the question of whether Xander is going to remain safe in this whole mess. The powers that be at B&B promise another shocking death before the baby swap storyline is wrapped up, so we have to wonder whether it could end up being Xander who perishes next.

After all, if Xander finds solid evidence that Thomas caused Emma’s accident, and Thomas finds out about it, then Thomas could very well go after Xander next! Do you think that Xander will be the next one on B&B to die?