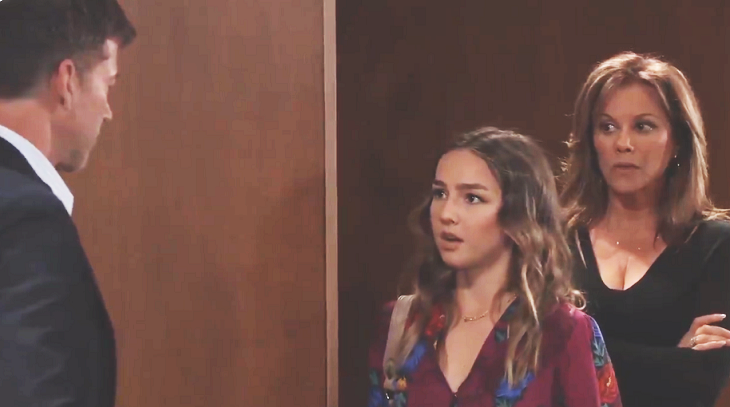 General Hospital spoilers tease that Kristina Corinthos-Davis (Lexi Ainsworth) will ask Dr. Neil Byrne (Joe Flanigan) to do family counseling with her and her mother Alexis Davis (Nancy Lee Grahn) and she will want it NOW!

On Wednesday’s General Hospital episode, Alexis had seen Kristina coming out of Neil’s office right before she was due for her appointment, and in that appointment she let it slip that she knew about Neil’s daughter dying.

He told her he couldn’t treat her anymore, because she wasn’t respecting the therapist-patient boundaries. However, Neil had consulted with his old friend Kevin Collins (Jon Lindstrom) a few days earlier. He had been unsure how to proceed with Alexis because he was getting too attached, so General Hospital viewers will have to wait and see how that goes.

Neil thinks it's time he and Alexis start seeing other people. What brought on the end of their relationship?
A dramatic, new #GH starts RIGHT NOW on ABC! @NancyLeeGrahn pic.twitter.com/6zF3FhnPvr

In GH previews, however, Kristina shows up at Neil’s office door as Alexis is leaving, having decided that she and Alexis need to talk about what Kristina put in her pledge to Shiloh Archer (Coby Ryan McLaughlin).

She will say say if she didn’t talk about it now, that she never would, as Neil is standing in his doorway. Now Neil has gotten himself into a pickle; he won’t want to turn Kristina down when she needs the help, but he just told Alexis he couldn’t treat her anymore!

General Hospital viewers however may have noticed in Wednesday’s episode that he couldn’t quite put down Alexis’ file for good, so maybe he was having second thoughts and trying to figure out if he could make it work to continue to treat her.

Neil may need Alexis more as a friend that he himself can confide in. Even though he told her in no uncertain terms when she reached out to him and let him know she understood his grief that his daughter’s death was off limits for conversation between he and Alexis and that she was not a medical professional.

No, Alexis hasn’t lost any children, but she lost a sister in an explosion, who she named Kristina after, and saw their own mother murdered in front of her as a child so she can certainly understand grief.

Will Neil postpone his “patient firing” of Alexis long enough for Kristina to talk about the reasons for putting what she did in her pledge with Alexis and working out their mother-daughter relationship?