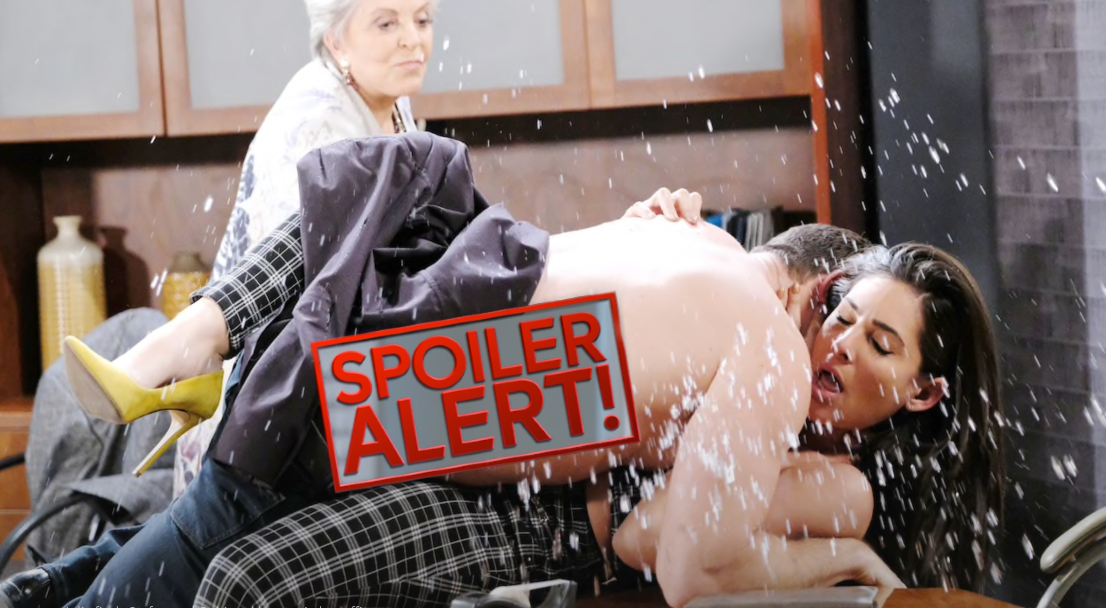 “Days of Our Lives” spoilers for the week of July 8-12 tease that sparks will fly in Salem. Stefan DiMera (Brandon Barash) and Gabi Hernandez (Camila Banus) will continue to feel the heat, so they’ll get creative about where they hook up. It turns out Julie Williams’ (Susan Seaforth Hayes) office will be where they decide to have their next steamy session.

For whatever reason, Gabi and Stefan just won’t be able to resist each other while they’re at Doug’s Place. After they sneak in the back for a quickie, Gabi will throw everything off the desk in preparation. It won’t be long until they’re stripping down and making out like crazy.

Gabi will halt the action briefly, but she’ll just want to remove a stapler that’s poking her. They’ll resume kissing again, but Julie will walk in before things can escalate. As you can imagine, Julie won’t be happy about this sexy spectacle in front of her. “Days of Our Lives” spoilers say Julie will grab a glass of water and toss it on the lovers. She’ll deliver the wet surprise and insist these two need some cooling off!

DOOL viewers can expect Julie to chew Stefan and Gabi out for getting busy in her workspace. She won’t know why they thought it was OK to do this, but she’ll assure them it most certainly was NOT. “Days” spoilers say Gabi and Stefan may not be able to defend themselves. There’s really no decent excuse, so they might have to just take what Julie dishes out and bolt ASAP.

Outside Doug’s Place, Stefan will admit he’s developed feelings for Gabi. He’ll add that he doesn’t care who knows, so Gabi will look touched by the confession. She’s clearly having a hard time sticking to this whole takedown plot. Gabi wanted revenge when she started seducing Stefan, but feelings have developed on her end, too. She may have to abandon the plan at some point, but big trouble’s brewing.

That’s because Brady Black (Eric Martsolf) will blab to Chloe Lane (Nadia Bjorlin) this week. “Days of Our Lives” spoilers say Chloe will stay quiet about the scheme initially, but who knows what might happen down the road? It’s dangerous to spread this secret since tender hearts are at risk.

DOOL fans won’t want to miss all the twists and turns ahead. We’ll give you updates as other “Days” news and rumors emerge.