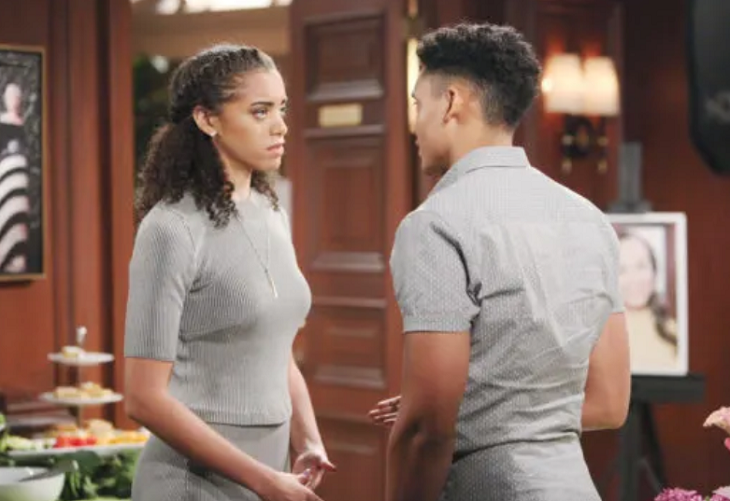 The Bold and the Beautiful spoilers for Tuesday, July 9, tease that Liam Spencer (Scott Clifton) will be stunned by Hope Logan (Annika Noelle) and Thomas Forrester’s (Matthew Atkinson) big news. As B&B viewers know, Hope and Thomas just got engaged after Douglas Forrester (Henry Joseph Samiri) proposed for his father during the 4th of July celebration.

Liam will reel from the news, which he and Steffy Forrester (Jacqueline MacInnes Wood) will hear all about on Tuesday’s episode of B&B. Liam will find the prospect of Hope being with Thomas to be sickening, and he’ll get comfort from Steffy as he tries to process what it all means.

Of course, Liam can see right through Thomas. He knows that Thomas used Douglas to make the marriage proposal compelling to Hope, and it irritates him to no end. He’ll probably want to go straight to Hope to talk some sense into her and get her to see that Thomas has manipulated her into this engagement.

But Steffy may stop Liam from getting involved in the matter. She’ll likely defend her brother, and she’ll point out that Liam needs to accept the fact that Hope and Thomas are engaged and move on with his life. But that will be easier said than done.

Xander also saw that Thomas’ car stopped right at the site of Emma’s accident, and that was enough to convince Xander that Thomas murdered Emma. Xander knows that Thomas would have done anything that night to keep Emma from telling Hope about her daughter being alive, and it looks like he resorted to murder!

Bold And The Beautiful Spoilers – Evidence Is Circumstantial

On Tuesday’s episode, Xander will corner Zoe and fill her in on this new evidence against Thomas. He’ll likely insist that they must go to the police and report this terrible crime against Emma. He won’t want to let Thomas get away with murder, but Zoe will stun Xander when she defends Thomas.

Zoe may argue that all Xander has found is circumstantial evidence. After all, just because he was following Emma and stopped his car doesn’t prove that he murdered her. Plus, there was evidence that Emma was texting and driving, and Thomas wasn’t responsible for that.

This will surely upset Xander. He won’t like it that Zoe is finding reasons to defend Thomas just so she can protect herself and her father from going to jail. From Xander’s perspective, a terrible crime was committed against a good friend of his, and he just can’t let it go. Look for some tense moments between Xander and Zoe, as they just can’t see eye to eye on what to do next.

Be sure to tune in on Tuesday to catch up on everything happening on B&B right now. In the meantime, keep up with Hollywood Hiccups for all the latest news and updates on all of your favorite daytime television shows right here.