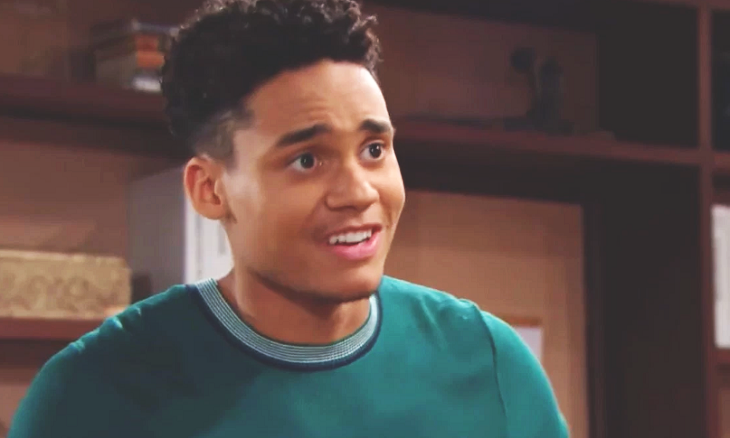 On “The Bold and the Beautiful,” Xander Avant (Adain Bradley) will increase his efforts in finding more proof that Thomas Forrester (Matthew Atkinson) was behind the death of Emma Barber (Nia Sioux).

Viewers may recall that he recently got his hands on surveillance tapes that show Thomas following Emma out of Forrester Creations on the night of her fatal accident. Although the tapes could be considered as evidence, it does not prove that Thomas murdered Emma.

Xander decides to take everything he’s got against Thomas to his girlfriend, Zoe Buckingham (Kiara Barnes). He thinks they’ll have a better chance of winning against Thomas if they do it together. However, Zoe turns on Xander instead.

Bold And The Beautiful Spoilers – Zoe Buckingham Is Unfazed

She says all his evidence are circumstantial and that he’s jumping to conclusions. But Xander will insist that Thomas murdered Emma. The ensuing argument will lead to Xander warning Zoe that she doesn’t get on board, she’ll lose him for good.

The Bold and the Beautiful POLL: Will Hope and Thomas Get Married?

Unfortunately, Zoe will be unfazed by Xander’s ultimatum. She believes there is too much at stake, and she can’t risk it even if it costs her their relationship. This may mean a potential breakup down the road.

Xander is determined to take down Thomas. The two will be involved in a confrontation with Xander telling Thomas that he has proof against him. Will Thomas allow Xander to ruin his chance of being with Hope? Will Xander be his next victim?

Bold And The Beautiful Spoilers – Will Thope Still Get Married?

In the coming weeks, viewers can expect Hope Logan (Annika Noelle) to accept Thomas’ proposal to become his wife. Of course, Liam will find a way to stop their marriage at all costs by telling her that he loves her. But Hope won’t be persuaded by his confession and will still proceed with the nuptials.

But it’s not just Liam who will try to prevent the marriage. Brooke Forrester (Katherine Kelly Lang) doesn’t want to let it happen as well. She tries to talk to Hope but when that doesn’t work, she’ll resort to more drastic measures.

The Bold and the Beautiful Spoilers: Reese May Be Greatest Threat To Thomas' Plans @SoapOperaSpy https://t.co/GWDRbfVcmo #BB #BoldandBeautiful

However, Ridge Forrester (Thorsten Kaye) will put a stop to whatever Liam and Brooke are planning against the wedding of Thomas and Hope. Will they really get married? Or will Xander reveal Thomas’ true colors just in time?