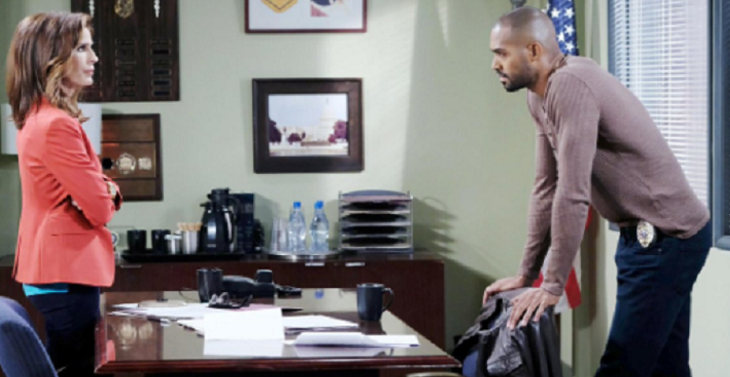 Days of Our Lives spoilers tease that Hope Brady (Kristian Alfonso) will ask Eli Grant (Lamon Archey) for help in her search for the missing Ted Laurent (Gilles Marini) on the July 9 episode.

It’s possible that she will know by this time that Kate Roberts (Lauren Koslow) is also missing. And Eli may also know, since Rex Brady (Kyle Lowder) and Brady Black (Eric Martsolf) agreed that Kate’s texts to Rex didn’t seem to be coming from Kate herself and Brady thought the police should be called.

All roads seem to be leading to Xander Cook Kiriakis (Paul Telfer) as the culprit, since Hope saw the necklace that Ted tried to gift her with and she turned him down on Sarah Horton Brady’s (Linsey Godfrey) neck. Sarah told Hope Xander gave it to her as a wedding present.

Days Of Our Lives Spoilers – Putting The Puzzle Pieces Together

Hope also wasn’t buying that the Dear Jane text really came from him Ted either. She questioned Xander about the necklace and he did concede that he bought it from Ted, but had encountered him in a pawn shop trying to unload it. He even denied knowing Ted, and Hope didn’t buy that story either.

Days Of Our Lives Spoilers: Kristen Shocked By What She Finds In Secret Room, What Will She Do?

By Wednesday, July 10th’s episode, Hope and Eli will start to put the puzzle pieces together and possibly find a connection between Xander, Ted’s disappearance, Kate’s disappearance, and strange goings-on observed at the Salem Inn that tie “Nicole Walker” (Adrienne Zucker) to Xander for reasons unknown.

Brady may have talked about that with Rex who may have reported it to the police. It’s entirely possible that Gabi Hernandez (Camila Banus), who was one of the last people to see Kate, will be questioned also.

Days Of Our Lives Spoilers – “Nicole” And Her Strange Behavior

Perhaps she will tell that she and Kate discussed “Nicole” and her strange behavior, and Brady may supply the puzzle piece about being told that Maggie Kiriakis (Suzanne Rogers) thought she saw Kristen DiMera (Stacy Haiduk) in Nicole’s room. Although he may say Maggie thought she heard her voice instead of seeing her.

Then there’s the fact of Hope herself thinking she heard a phone ring inside Nicole’s room when she tried to call Ted, although it only rang once and didn’t on the second try.

Days of Our Lives viewers know there’s a reason for that…his phone ran down in between the two calls from Hope. By the end of the week, Hope will be following Xander to the DiMera mansion and the secret room!