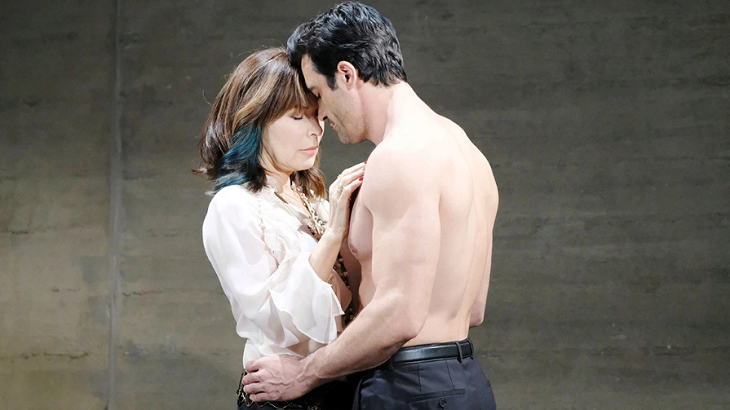 Days of Our Lives (DOOL) recap for Monday, July 8, 2019, reveals Sarah Horton (Linsey Godfrey) tells Eric Brady (Greg Vaughan) that she wants to be there for him like he was for her.

He says Sami Brady (Alison Sweeney) encouraged him to talk to Sarah, but he didn’t because Rex and Sarah asked him to marry them. Marlena thinks Rex deserves a woman to love him with her whole heart, and Sarah can’t. Marlena tells Eric he and Sarah need closure. Eric asks how to get closure. Marlena says Eric should have told the truth from the beginning. Marlena says Rex will eventually notice the truth.

Days Of Our Lives Spoilers – Brady Black Exposes The Plan

Sarah assumes Rex slept with Chloe. Rex tells Sarah he gave Chloe her necklace. Rex tells Sarah he is getting weird texts from his mom, and she’s not answering her phone. Rex vows to go to the police if he doesn’t hear from Kate soon. Sarah apologizes for jumping to conclusions over Chloe. Sarah wants to go on a honeymoon; she needs that.

Days of Our Lives Chloe and Brady talk about Gabi Hernandez (Camila Banus) and Stefan Dimera (Brandon Barash). Brady goes on to tell Chloe about Gabi’s plan. Brady explains that he suggested Gabi seduce and marry Stefan and take everything he has. Brady thought this would give him and Chloe another chance. Chloe asks if she walked in on the part of a scam, Brady says it must be working. Brady apologizes and says he should have told Chloe sooner. Chloe thinks Stefan deserves to be destroyed.

She tells Xander he was the last person to see Ted. Xander claims Ted to him he sent Hope a text to break up with her. Hope accuses Xander of sending the text. She knows Xander did something with Ted. Hope spies a second phone and asks about it accusing Xander of having Ted’s phone. Xander throws Hope out after she vows to find Ted wherever he is. Xander leaves the mansion.

Days of Our Lives Nicole opens the secret room door to find Ted and Kate who rush for the door. Nicole slams the door closed, Kate and Ted try to talk Nicole into letting them out. Kate says Kristen Dimera (Stacy Haiduk) is behind this. Ted and Kate tell Nicole that Kristen has to be holding something over her head. Kate saw the red dress, and she knows Kristen is behind this. Ted and Kate know how to deal with Kristen. They beg Nicole to let them out, but she leaves. Kate tells Ted Nicole is going and Xander is lying to her.

Days Of Our Lives Spoilers – Nicole Brady’s Change Of Heart

Kate and Ted assume Nicole went back for a weapon to finish them off. Ted says they only have Xander’s word that Nicole wanted them dead. Kate tells Ted that Nicole has killed before and could do it again. Ted breaks two bottles to prepare himself and Kate for whoever comes in next. Ted promises to protect Kate until death. Kate admits to being scared; Ted sits beside her. Xander arrives to check on Ted and Kate, and Nicole is outside demanding answers.

Days of Our Lives Gabi wants to have sex with Stefan while Nicole is getting the champagne. Gabi and Stefan start to kiss, he pulls back and asks how they got to this point. Stefan doesn’t want to get thrown out of his own company because of their affair. Gabi starts to go downstairs after the champagne, Nicole stops her.

Nicole owes Stefan for giving her a chance and Gabi’s ideas were good. She promises to do better from now on, Gabi accepts her apology. Nicole decides she has to leave; Gabi brings up multiple personalities. Nicole stops outside the door and calls Xander. Xander hangs up on Nicole, who vows there will be hell to pay. Gabi hugs Stefan who tells her something is up with Nicole.