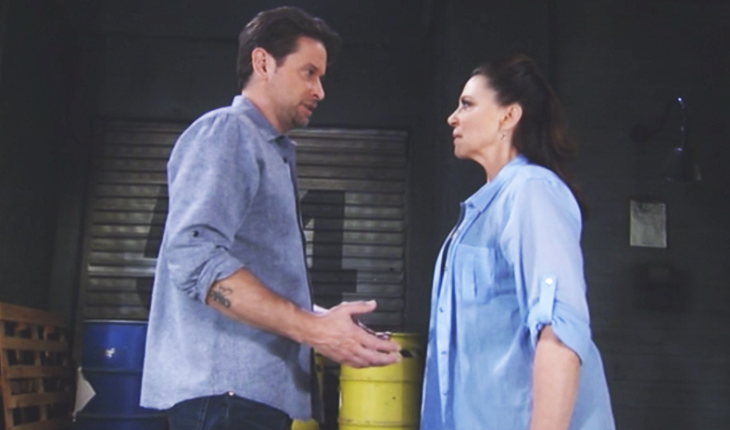 General Hospital spoilers tease that a tipsy Liesl Obrecht (Kathleen Gati) will let something slip to Franco Baldwin (Roger Howarth). General Hospital previews also show her talking to a confused Felix DuBois (Marc Samuel), and it sounds like she’s divulging the baby swap when she tells Felix that a marriage isn’t built to last.

It only makes sense that she’d be telling Felix that about the marriage of Dr. Lucas Jones (Ryan Carnes), who was formerly Felix’s boyfriend, to Brad Cooper (Parry Shen), who is the only one besides Nelle Benson (Chloe Lanier) who knows that baby Wiley-Cooper Jones (Eric and Theodore) is really Jonah Corinthos!

Perhaps Obrecht tells two secrets, one to Felix and one to Franco. Since Franco was once very close with Nina Reeves (Cynthia Watros) maybe she tells Franco about Sasha Gilmore (Sofia Mattsson) not really being Nina’s long-lost daughter.

Franco wouldn’t want to hurt Nina, so it’s doubtful that he will tell her this secret, although he might want to take a closer look into Sasha to make sure she won’t devastate Nina herself.

Franco went on the run with Nina when she kidnapped Avery Corinthos (Ava and Grace Scarola) as a newborn, after inducing Ava Jerome’s (Maura West) labor several years ago. He knows how deep that desire for her own child goes in Nina.

She’s not nearly as fragile now, so she probably wouldn’t totally go off the deep end like she did then, but he still won’t want to take any chances with his friend’s heart or sanity. If Liesl tells Felix the one secret and Franco the other, she might make herself feel better but she’ll regret it later in the week, as other General Hospital spoilers say.

The General Hospital weekly spoiler video featuring the festivities of Franco and Elizabeth Baldwin’s (Rebecca Herbst) wedding reception on the Haunted Star shows Liesl going over the edge of the deck into the water below.

There have been no official reports of Kathleen Gati leaving the series, since Liesl Obrecht is a popular and well-loved character. But it does sound like if she lets two secrets spill that could devastate friends and family, General Hospital is setting up a mystery as to if she was pushed and who did it. Although there are no spoilers currently released that Liesl may not survive her plunge, she may be seriously injured.