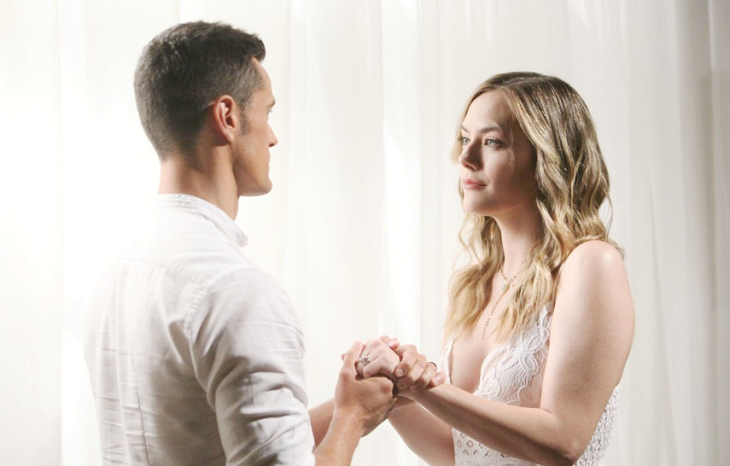 The Bold and the Beautiful spoilers tease that Hope Logan (Annika Noelle) has come to believe in a new destiny. While she just reaffirmed her lifetime love to Liam Spencer (Scott Clifton), which he reciprocated, Lope must still be referenced to in the past tense.

Liam hit the plot nail on the head when he told Hope that he didn’t understand why Beth’s (perceived) death has to mean that they can’t be married. Her response is what is was in the days and weeks after the Catalina Island catastrophe.

Bold And The Beautiful Spoilers – Lope Said A Final Goodbye

She does not want to put herself through another pregnancy, now believing that she’s lost two children, when actually it’s only one. Hope also feels that Liam’s place is with Steffy Forrester (Jacqueline MacInnes Wood). She’s the mother of Kelly Spencer (Zoe Pennington and Allison Marcia Sweeney), Liam’s known child, and the adoptive mother of Phoebe Forrester, who Lope doesn’t know is Beth in disguise.

Lacking the truth, Hope believes that Liam should consider Phoebe as his other daughter and help Steffy to raise her as his own. That can only take place, according to Hope’s grief-stricken outlook, by having Steam reconcile, which has started to happen.

However, B&B fans know that the dastardly Thomas literally forced the Steam issue by putting a drug into Liam’s drink. That caused Liam to want Steffy through a fog of chemicals and revived feelings. Liam felt compelled to inform Hope about that information the next day and now Lope appears to have said a final goodbye.

Bold And The Beautiful Spoilers – Winning Streak Will End

With Thomas’ plan to have Douglas Forrester (Henry Joseph Samiri) propose for him to Hope, the nickname Thope will soon be trending. The depths to which this guy is using his motherless son not withstanding, one has to grudgingly admit that Thomas’ plans have threaded the Forrester Creations’ needle. His overall goal isn’t just to be married and have Hope be his son’s mother, but also to lead FC with his bride.

What’s happening is so incredible that B&B fans know Thomas’ winning streak will end with a loud, resonating thud whenever and however the baby swap reveal is dropped. It’s understood that this arc is only being forwarded through the rapid success Atkinson’s character continues to enjoy. At some point one of the secret-keepers just won’t be able to hold her, or his breath any longer, or Thomas will mess up.

Pushing the buttons of Flo Fulton Logan (Katrina Bowden), Zoe Buckingham (Kiara Barnes), Xander Avant (Adain Bradley), and Liam has to lead to reprisal. But maybe the lady at the center of it all, Hope, will be the one to cause Thomas to finally miss his mark, whether that be before, or after the proposed marriage happens.