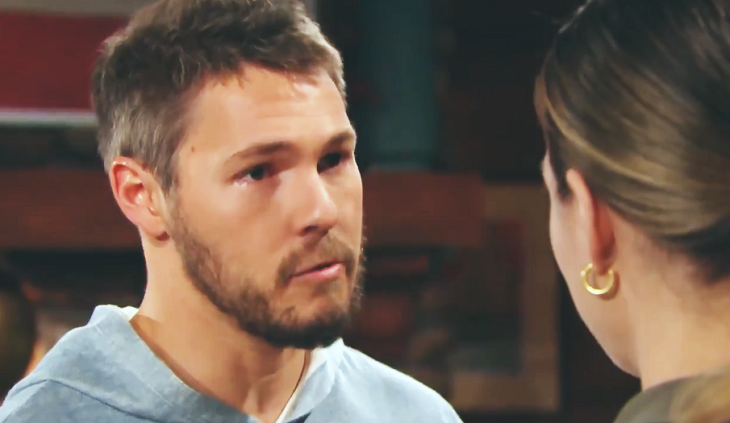 The Bold and the Beautiful spoilers for Wednesday, July 10, tease that Hope Logan (Annika Noelle) will get an earful from Liam Spencer (Scott Clifton). As B&B viewers know, Liam has just come to visit Hope with the goal of dissuading her from marrying Thomas Forrester (Matthew Atkinson). Liam is devastated to think of Hope marrying Thomas, and he wants nothing more than to get her to see the light about the manipulative schemer.

On Wednesday’s episode, Liam will make a touching admission to his ex-wife. According to B&B spoilers, he’ll decide to speak from the heart and express his true love for Hope once again.

He’ll hope that by doing so, he gets her to see that he’s her true love, not Thomas. He’ll think that surely Hope won’t want to marry someone who she doesn’t really love.

But it doesn’t look like Hope will end up being persuaded by Liam, since she didn’t really make her decision to marry Thomas based on her love for him. Rather, Hope decided to marry Thomas to have a way to make sense of her very broken life – she’s devastated over the fact that Liam is moving on with Steffy Forrester (Jacqueline MacInnes Wood) and of course she’s still mourning the death of her daughter Beth Spencer.

So, although Liam pours his heart out, it doesn’t look like Hope will be convinced to call off her engagement to Thomas. This will leave Liam baffled, while Hope will have to soon contend with Thomas wanting some hastened wedding plans.

Meanwhile, on Wednesday’s new episode of B&B, Xander Avant (Adain Bradley) will do something very dangerous. He’s decided that enough is enough and that Thomas has to be confronted about what happened to Emma Barber (Nia Sioux). As B&B viewers know, Thomas essentially ran Emma off the road and to her death on Mulholland Road, and he’s gotten away with it scot-free.

Bold And The Beautiful Spoilers – Is Xander Avant Next To Die?

But Xander just can’t stand for Thomas getting away with murder. According to B&B spoilers, he’ll put his life in danger and confront Thomas about what he did on the night of Emma’s tragic death.

That may not be a smart move, since Thomas has already proven that he’ll do just about anything to keep the secret about Beth from getting out.

Bold and the Beautiful Spoilers: Thomas Sinks To An All New Low – Can Hope Be Saved From His Evil Plan? https://t.co/W3QtZW8Vpm pic.twitter.com/vQY6PBtMc6

It will be interesting to see what happens between Thomas and Xander, especially since TPTB have promised another B&B death before the Beth secret finally is revealed to Hope and Liam. Could Xander be the next to die? Will Thomas claim another life, or will he just resort to making threats against Xander?

Be sure to tune in on Wednesday to catch up on everything happening on B&B right now. In the meantime, keep up with Hollywood Hiccups for all the latest news and updates on all of your favorite daytime television shows right here.