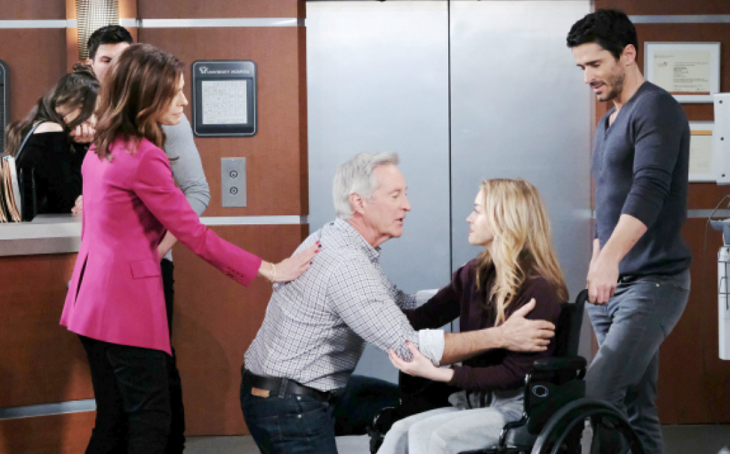 Days of Our Lives Hope Brady (Kristian Alfonso) wants to speak to Eli Grant (Lamon Archey) off the record. Eli doesn’t think Eve will be commissioner much longer. Eli tells Hope about the messages on Claire’s phone and how Eve knew everything. He tells Hope Eve refuses to drop the charges against Ben and advises Eli to move the phone out of evidence and put it somewhere safe.

Days Of Our Lives Spoilers – All The Charges Are Dropped

Days of Our Lives Marlena Evans (Deidre Hall) updates Ben Weston (Robert Scott Wilson) and Ciara on Eve’s status and his charges. Marlena tells Ciara they are waiting for the judge’s decision on Claire’s fate. Ciara wants to visit Claire, but Marlena isn’t sure it is a good idea. She decides to walk to Claire’s room with her.

Marlena brings Eve outside, and Ben asks why she was in Claire’s room. Eve denies knowing anything about the fires. Eve accuses Ben of threatening her. Marlena tells Eve the phone has been turned over to Eli. Eve excuses herself to try and get to the phone. Eve beats Eli to the police station, and the phone disappears. Eve threatens to fire Eli for insubordination

Days of Our Lives Belle Black (Martha Madison) informs Claire that she will be remanded to Bayview for treatment or have to stand trial for attempted murder. Shawn Brady (Brandon Beemer) and Belle want to watch a movie, but Claire wants to be alone. Belle and Shawn leave and Eve comes in and apologizes to Claire. Claire tells Eve it’s not her fault and asks Eve what kind of monster she is to have tried to kill Ciara again.

Days Of Our Lives Spoilers – Eve Deveraux Is Thrown Out

Eve beings up Claire’s suicide attempt, Claire thinks she should have killed herself when she had the chance. Eve tells Claire that she tried to kill herself once when she was younger. Eve tells Claire that her grandparents know she did nothing to stop Claire. Marlena and Ciara walk in and find Eve talking to Claire. She orders Eve to leave Claire’s room. Ciara tells Eve she will lose everything and deserves what happens. Marlena threatens to call hospital security. Claire claims that Eve is innocent.

Marlena forces Eve to leave, Claire asks why Ciara is there. Claire thinks Ciara should hate her because Claire hates herself. Claire tells Ciara she’s sorry for what happened. Ciara and Claire talk about meeting up in Amsterdam and who Claire had such a glamorous life. Claire and Ciara were jealous of each other. Ciara doesn’t know if they can be close again, but she would like to, so would Claire. Belle and Shawn come back in and tells Claire they heard from the judge.

Days of Our Lives Ciara comes out of Claire’s room and informs everyone of the judge’s decision. Belle asks for Marlena’s help filling out the papers after telling Claire she and Shawn are staying in Salem. Ciara promises to visit Claire at Bayview if she wants. Claire apologizes to Ben for blaming him for the fires. Ben assures Claire that things will be ok if she trusts her doctor’s at Bayview. Ben tells Claire not to eat the oatmeal. Claire asks Marlena to go to Bayview with them. John and Hope promise to be there every step of the way for Claire as well.

Days Of Our Lives Spoilers – Claire Brady Says Her Goodbyes

Days of Our Lives Haley Chen (Thia Megia) is at the loft when Tripp Dalton (Lucas Adams) comes out of the shower. Haley stopped by to get her things and check on Tripp. She is sorry that Tripp got hurt. Tripp nor Haley can believe Claire tried to kill them. Haley feels guilty for marrying Tripp; she thinks that is what pushed Claire over the edge.

Haley tells Tripp their marriage has been annulled and tells him he is the best fake husband anyone could ever have. She gets the rest of her things and tells Tripp she will be at J.J. Deveraux’s (Casey Moss) for now. Tripp and Haley arrive at the hospital for Tripp’s checkup. Claire apologizes to Tripp and Haley for trying to kill them.

Haley and Tripp both apologize for hurting Claire. Tripp tells Claire all the help she gave him. Tripp will never forget everything Claire did for him and will always be sorry that he hurt her so deeply. Claire tell Tripp he is kind and sweet and he deserves to find true happiness one day, Tripp tells Claire she does too.