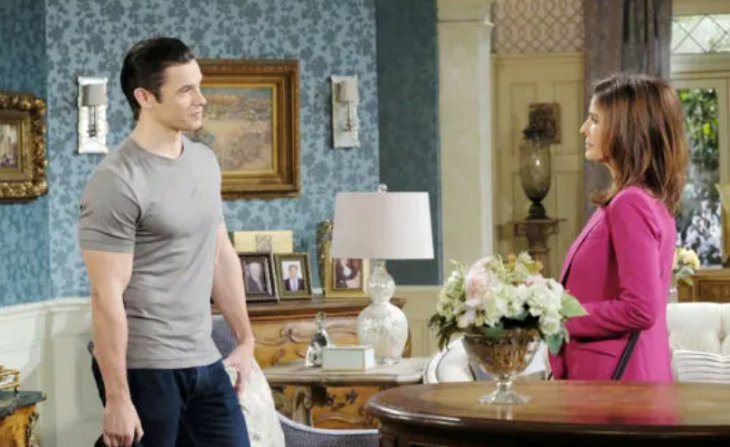 “Days of Our Lives” spoilers for Wednesday, July 10, tease that Hope Brady (Kristian Alfonso) and Eli Grant (Lamon Archey) will take a step closer to the truth. They’ll contemplate the case surrounding Ted Laurent’s (Gilles Marini) disappearance, so it won’t be long until more dots connect. “Days” fans can expect Xander Cook (Paul Telfer) to be taken to the Salem PD for some intense questioning.

Of course, Xander won’t divulge the truth about Holly Jonas (Harlow and Scarlett Mallory) or his partnership with Kristen DiMera (Stacy Haiduk). He’ll do whatever he can to make sure their scheme stays under wraps, but that won’t be easy as Hope continues to dig. Kristen herself will cause problems for Xander next week, so he’ll definitely be in hot water.

In the meantime, one of Kristen’s plans will hit a huge snag. She’s hoping to take over DiMera Enterprises, but Stefan DiMera (Brandon Barash) will get fed up with “Nicole Walker” (Arianne Zucker) on Wednesday.

Days Of Our Lives Spoilers – Can’t Deal With Drama Anymore

“Days of Our Lives” spoilers say Stefan just won’t be able to deal with the drama anymore. He’ll fire “Nicole” for her outrageous behavior and insist she’ll need to clear out immediately.

Naturally, Kristen will seethe over Stefan’s decision. It’ll lead to some shockers Stefan never say coming. Down in the secret room, Ted will surprise Kate Roberts (Lauren Koslow) with a confession.

It appears Ted will come clean about Holly’s faked death and his role in it. Ted will likely bring Kate up to speed on his partnership with Xander as they try to make sense of Kristen and “Nicole’s” involvement.

Days Of Our Lives Spoilers – Ben Weston Will Celebrate

Kate and Ted won’t realize “Nicole” and Kristen are the same person just yet. No one suspects a thing thanks to that incredibly realistic mask Kristen’s been using. However, Kristen will reveal herself to her captives by the end of the week. That’s sure to bring some explosive DOOL moments!

Other “Days of Our Lives” spoilers say Ben Weston (Robert Scott Wilson) will have something to celebrate. This probably involves Ben’s name being in cleared in the arson cases, so he should be on cloud nine with Ciara Brady (Victoria Konefa). Eve Deveraux (Kassie DePaiva), on the other hand, will feel the walls closing in. She’ll have to make a startling admission to her husband soon enough.

Jack Deveraux (Matthew Ashford) will have a lot to process, so don’t miss the exciting scenes ahead. We’ll give you updates as other “Days” news and rumors emerge.