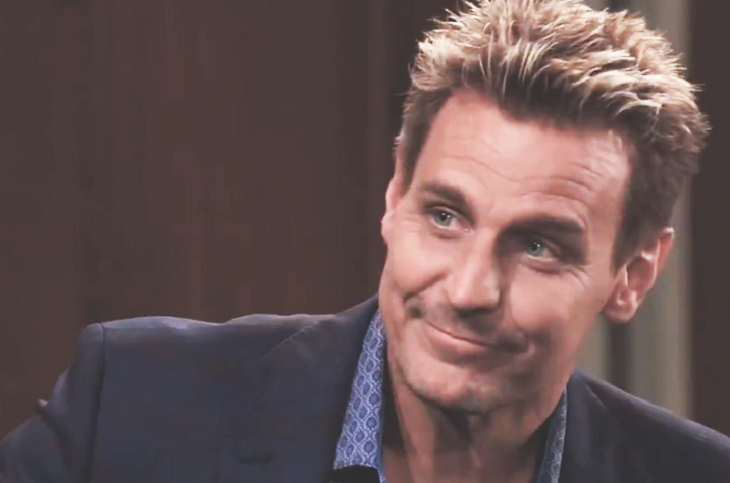 General Hospital spoilers tease that Jasper Jacks (Ingo Rademacher) will be pleasantly surprised on the July 7 episode. This might be in reference to spotting a lovely work associate Nina Reeves (Cynthia Watros) at Franco and Elizabeth Baldwin’s (Roger Howarth, Rebecca Herbst) wedding celebration aboard the Haunted Star.

In General Hospital promos, Jax appears to arrive solo, unless he comes with his daughter Josslyn Jacks (Eden McCoy) in tow, having changed her mind about attending the festivities. She had turned down Cameron Webber (William Lipton), when he asked her to go with him, on Friday’s episode.

Of course, Jax’s obvious pleasure at seeing Nina there won’t be met with much enthusiasm by an intimidated Valentin Cassadine (James Patrick Stuart). He can see Jax’s obvious attraction to his fiancé and he knows about Jax’s history of stealing other mens’ women!

Valentin tried to get fellow Jax rival Sonny Corinthos (Maurice Benard) to band with him to get Jax to leave Port Charles, but Sonny had an obvious conflict of interest because of being married to Jax’s daughter’s mother, Carly Corinthos (Laura Wright).

However, Sonny would like to see Jax leave town as much as Valentin does. He just can’t do anything much about it because of Joss. Plus, Sonny’s got a lot of other things to handle with continuing efforts to take down Shiloh Archer (Coby Ryan McLaughlin).

He’s also trying to help keep his young friend Dev Cerci (Ashton Arbab) in the United States legally, at least for the summer. As General Hospital viewers know, Sonny isn’t exactly going about things for Dev in a legal manner, but it’ll solve the problem for the time being.

Jax will likely continue to be a little too close to Nina for Valentin’s comfort. Other General Hospital spoilers tease that Valentin will succumb to the green eyed monster of jealousy by the end of the week. He will see Jax and Nina’s working relationship start to thaw and Nina will start to warm up toward her new boss a little bit.

General Hospital Spoilers: Will Kim Take A Ride On The Crazy Train To Ferncliff? https://t.co/83bR0UFCYw pic.twitter.com/fv3GWLEQF9

However, a new lovely lady will crash the party on the Haunted Star. Maybe Nina and Valentin can try to fix Jax up with Hayden Barnes (Rebecca Budig), if Carly doesn’t swoop in to protect him! Although Jax is a big boy and can take care of himself.