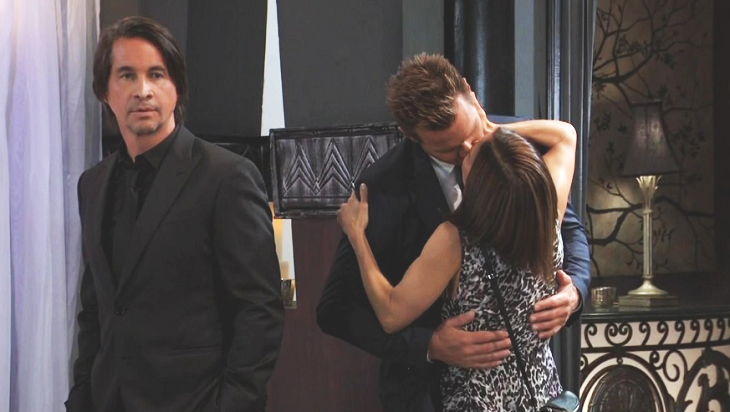 Ava keeps talking but distracts Sibley who tells her Kiki is gone. Ava demands Sibley bring Kiki back, or she’s not going anywhere. Ava accuses the psychic of exploiting her daughter’s death. Ava feels Kiki’s presence; Kiki wanted to be at their dinner. Ava continues to demand contact. Ava needs Kiki to come back; she has a lot to say to her. Sibley offers to try to channel Kiki’s spirit but warns that once the door is open, it’s not easily closed.

General Hospital’s Liz Baldwin (Rebecca Herbst) hugs Hayden Barnes (Rebecca Budig) and thanks her for coming. Hayden wouldn’t miss the happiest day of her sister’s life. Curtis Ashford (Donnell Turner) says hi to Hayden before she kisses Jasper Jacks (Ingo Rademacher). Cameron Webber (William Lipton) wants to know if Hayden is staying in town, Curtis wants to know as well. Liz asks if Curtis managed to get any answers out of her sister. Hayden worked with Jax in Rome.

General Hospital’s Cameron, Josslyn Jacks (Eden McCoy), and Trina Robinson (Sydney Mckayla) come up on deck after Liesl Obrecht is pushed overboard. The kids hear Liesl calling for help. Cameron runs inside and yells for help because someone is overboard. Jax and Hamilton Finn (Michael Easton) save Liesl. Nina Reeves (Cynthia Watros) runs outside as Finn is giving Liesl mouth to mouth.

Once Liesl is inside, Nina demands to know where Valentin Cassidine (James Patrick Stuart) has been. Nina thanks Curtis for helping with her aunt and then goes to thank Jax. Hayden is talking to Jax about a proposal. Liesl announces she was pushed into the water. Jax introduces Josslyn to Hayden before sending the kids home in a limo. Valentin and Nina congratulate Franco before leaving. Liz and Jax talk about her and Franco before Hayden joins Jax and wants to go to the hotel.

General Hospital’s Kim Nero (Tamara Braun) drugs Drew Cain (Billy Miller) and gets him to a bed. Kim removes Drew’s shoes and then hers before climbing into bed with him. Kim tells Drew he will be here for all the baby’s moments and will forgive her once he sees their child. Drew is dazed and confused.

Julian Jerome (William DeVry) walks in on Kim in bed with Drew. Kim tells Julian it isn’t what it looks like and wants him to leave. Julian demands to know what Kim gave Drew; she says it was a mild sedative. Julian wants to know if Kim had sex with Drew. Kim says this baby will make her pain go away. Kim is sure someone of Oscar Nero (Garren Stitt) will be there. Julian tells Kim that it is not fair to the baby. Julian gets Kim out of the room before Drew wakes up.

Drew stumbles to the door and into Curtis. Drew tells Curtis he doesn’t know how he got there. Drew questions where he is, Curtis tells him he is in the stateroom on the Haunted Starr. Curtis finds the needle in the hallway, Drew realizes Kim drugged him. Curtis wants to call Jordan Ashford (Briana Nicole Henry), Drew says no, the person who did this is in enough trouble already. Drew remembers the whole conversation with Kim and asks Curtis to get him out of there.

General Hospital’s Lulu Falconeri (Emme Rylan) speaks to Maxie West (Kirsten Storms) and Peter August (Wes Ramsey) before joining her date. Lulu tells her date that she’s working on a story. Lulu and the guy seem to connect and enjoy each other’s company.

Maxie wants to have Damien Spinelli (Bradford Anderson) to come up with fake ids to get her and Peter into the WSB compound. Peter reminds Maxie that the WSB would have her photos in their files. Maxie is going to text her dad for help. Lulu makes plans to meet Dustin Phillps (Mark Lawson) for a ride home. Maxie gets a text allowing her and Peter to visit Dante Falconeri (Dominic Zamprogna).

General Hospital’s Liz goes onto the deck and asks Finn how he’s doing. Liz asks if Finn heard Liesl claim that she was pushed. Liz didn’t push her, Finn will never tell. Liz says it could have been anyone on the boat that pushed Liesl. Liesl tries to convince Nina that she was pushed, Nina thinks Liesl fell. Bobbie Spencer (Jackie Zeman) goes to round up the happy couple while Scott Baldwin (Kin Shriner) prepares his toast. Bobbie overhears Liz and Franco talking about Liesl and how he will get the truth out of her tomorrow.

Bobbie returns without the couple and pulls Brad off to himself. She tells Brad that Liesl knows about Wiley Cooper-Jones (Theo and Erik Olson) father. Scott wants to know if Bobbie took care of everything before they say goodbye to Liz and Franco. Bobbie is proud of Franco and offers them advice. Scott loves both of them; he and Bobbie leave together. Franco asks Liz to dance. Franco is looking forward to being by Liz’s side for the rest of his life.